We’ve all been there; stumbling down the high street after a boozy night to the nearest kebab shop for something super greasy and super regretful. Have we all had violent altercations with the staff in said kebab shops? Hopefully not, but I’m sure many of us have witnessed other inebriated idiots having a go.

This trailer for K-Shop paints a cynical, but wholly believable, portrait of Britain’s binge-drinking culture as a kebab shop owner reaches the end of his tether and decides to cook the people who piss him off. It’s the 21st century’s answer to Sweeney Todd and we’re a huge fan of its dark humour and relevant comment on society. We think we’ll lay off the kebabs in future, though. 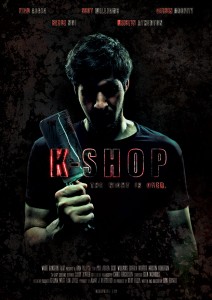 Synopsis:
K-Shop is set in a British Kebab Shop plagued by binge drinking culture. After his father is killed in an altercation with drunken thugs, Salah’s fate is sealed in a fight with an angry customer. With a dead body on his hands the novice kebab shop owner turns vigilante disposing of the body in the one place he knows best…the kebabs. Salah watches gullible customers devour the new flesh kebabs and seizes the opportunity to seek revenge on abusive drunken binge drinkers, killing off those he deems punishable.

Take a look at the trailer for K-Shop below. The film comes from director Dan Pringle and stars Ewen MacIntosh, Darren Morfitt and, Reece Noi, Scot Williams Lucinda Rhodes. K-Shop will open this June, so be sure to grab yourself a copy.