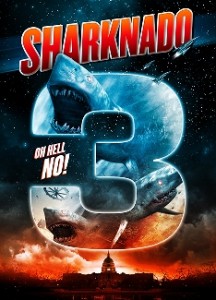 Yes! It’s coming! Sharkando 3… You may not be a fan of the franchise but the fact is the last two films have made plenty of money worldwide so another sequel was inevitable. Anyway, check out the artwork on the right released today. Storywise, it’s goes something like this: When a mass of sharknadoes threatens Florida, chainsaw-wielding hero Fin must again risk his life to save his children on spring break. But as he fights his way south, the sharknadoes merge and grow bigger than ever before. The film is produced by The Asylum and David Rimawi, David Michael Latt and Paul Bales. Sharknado 3 is due out sometime in 2015.