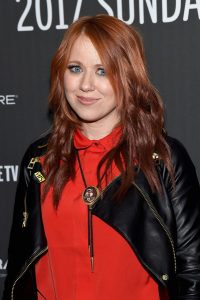 Whilst XX is far from the first anthology Roxanne Benjamin has been involved in, it must surely be one of the most important movies in her career, not only because it’s the first ever all-female led horror anthology, but also because of the slew of challenges that came with it. In a recent interview with Producer/Director Jovanka Vuckovic, she told us how these challenges had included: “Shooting it across three different countries, multiple Unions, multiple Union changes, director lineup changes, and we could have given up part way through and said, “You know what? Let’s just hire a guy to do the last segment and get it over with and release it as a horror anthology.” But Todd [Brown] never gave up on the project and Magnolia never gave up on the project and we remained committed to making it for women, by women.”

With XX all set to release through XYZ Films/Magnet Releasing this Friday, SCREAM’s Howard Gorman also caught up with Benjamin to talk about her particular approach to this brand new anthology and discover the impetus behind choosing the two stories she was involved in: the “Don’t Fall” segment, which she wrote and directed herself, and the “Birthday Party” segment, which marked Annie Clark’s (AKA St. Vincent) first helming gig…

SCREAM: It was XYZ Films’ Todd Brown who got the ball rolling for this project when he made a call to bring Jovanka Vuckovic on board. How did you eventually become involved in the project?

Roxanne Benjamin: I wasn’t involved with it until this past year. I think they’d been making it for a while and Todd had reached out to me about producing Annie Clark’s section. So I met with her and we got along and she had a very specific idea that she wanted to start from and we ended up writing it together. And then, after we finished her section, they needed another director so I pitched them some ideas and they were into it so I ended up directing my own segment.

SCREAM: I hear that Annie Clark is not the biggest of horror fans, especially if gore is involved, so I’m guessing she was very specific in terms of how she wanted to tell her story. 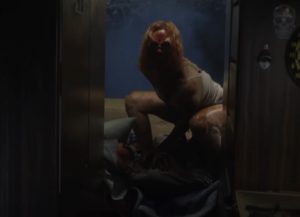 RB: It was partially a true story of one of her friends who had had experienced waking up and finding a dead body to deal with and trying to protect children from that knowledge. So that was the starting point and when we were in the process of writing it, it was very serious and grim and Michael Haneke was the main influence. We got about halfway through when we realised we were making a fucked up version of Weekend at Bernie’s. Once we realised that it was just a really messed up comedy, we just went with it and it ended up being this very dark, dark comedy about the same scenario.

SCREAM: This is the first time Annie’s directed. Did she ask you for much assistance or did she come in very sure of how she was going to go about it?

RB: Well it’s always a very close relationship between the producer and the director on set when you’re putting everything together. Your job as a producer is to help the director create their vision so there are a lot of questions involved. It’s a bit like being with a therapist trying to get deeper and deeper and closer towards what the core of the idea is. So when it came to the actual directing part, I think the biggest thing was just that it was kind of like learning a different language. Once she had the building blocks of the language, she was good to go and she just ran with it.

SCREAM: Aside from you working with Annie on her segment, you didn’t discuss anything with the other directors. With you having gone with a dark comedy for Annie’s segment, did that influence your decision to shoot a very different type of short compared to hers?

RB: I just wanted to tell a very pulpy, dime store horror story if you will, taking the tropes that we know and having fun with them and placing them in a desert scenario. I wasn’t thinking of the anthology as a collection and I just wanted to make something that was a fun rollercoaster ride of a short which, hopefully, people will see in theatres because the sound design has SO MUCH to do with it. (laughs).

SCREAM: As it’s the first all-female anthology, did you feel any particular pressures or the need to approach it any differently than how you approached any of the previous anthologies you’ve worked on? 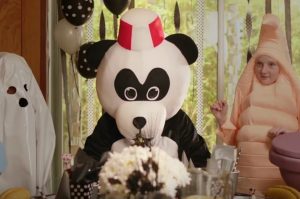 RB: No, not at all. I certainly didn’t try and do anything differently as a producer or a director. I’ve worked with so many creatives that are women on those other movies like Editors, Producers and Department Heads so it was no different for me. I think it’s great that the goal was to make this anthology driven by women but I don’t think the horror movies are female-centric in some way because of it. I think they just reveal different anxieties of each director just like they would if they were anything else.

SCREAM: I think you only met with the other filmmakers when you got to Sundance. Were you surprised by the similarities or disparities between the different segments?

RB: Well I only met the directors at Sundance but I worked on the entire post process so I was working very closely with all of the other directors’ projects in getting the movie done so I’d seen all of them together many times. But it was honestly so much more interesting to meet the makers for the first time. It’s a very odd experience to not meet your fellow filmmakers until the film is actually premiering.

What’s interesting to me with all these anthologies is that although each segment is made completely inside a vacuum for the most part, it’s so interesting what themes you can eventually pull out from the collection. I think the themes reveal more of a societal fear. Also, we’re corollary animals. We like to make things have a causation or a connection in one way so I think one of the things we’re trying to do in any art piece is to try and find meaning and connection in those pieces. So when you see pieces juxtaposed, you’re going to try and find those connections, which is kind of the point of it, I guess. You see two completely separate things together and still manage to come up with a way that they’re correlated. In XX, I think one of the very obvious ones is that three of the segments have female characters who are mothers, although mine has nothing to do with that (laughs).

SCREAM: You tend to have all kinds of things on the go. Are you able to shed any light on projects you’re working on right now?

RB: Yeah. There are three different movies I’m working on. I’ve got two different TV show ideas. It’s always just a matter of who would like to finance these and then that will be the thing that I’m working on. Until then, when you’re an independent, writer, producer and/or director, it’s more a case of you sitting at home with your laptop and your cat and it’s not a real thing until somebody puts money behind it. I’ve got a tonne of stuff that’s ready to go but it’s just a case of finding the money to do it.

We’d like to thank Roxanne for taking time to speak with SCREAM and we strongly suggest you seek out XX when it hits select theatres and VOD this Friday, 17 February.

In the meanwhile, we’ll leave you with the film’s trailer…