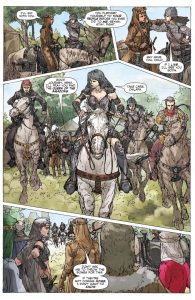 The last issue of Dynamite’s Xena: Warrior Princess ended with Gabrielle and Ares sneaking away to Rome, presumably on a suicide mission in order to save Xena from dying at the hands of Augustus Caesar. But if Xena’s mythological narratives taught us anything, it’s that trying to avoid a prophecy from coming true will almost certainly ensure that it happens – like Xena and Gabby’s crucifixion in season four, or the Twilight of the Gods arc in season five. True to form, by the end of Issue #5, Xena is closer to fulfilling the prophecy than ever before, and with Gabrielle in Rome and most of the harpies captured, it begs the question as to who exactly will save the Warrior Princess from certain death.

Ironically, since this is the first time Xena and Gabrielle have been separated, the best thing about the issue is the relationship between the two characters. When she discovers that Gabrielle has left her, Xena acts like the Conqueror of Nations that she used to be, rallying her troops and launching a full-scale attack in order to save Gabby from the Romans. The moment in which she reads Gabrielle’s final note is a powerful one – particularly as it would have been easy to make this sequence twee and sentimental. Xena reads the scroll with a steely determination, becoming increasingly desperate as the story progresses to its conclusion. By the final pages, Xena is left broken and humiliated, and it will be interesting to see what Valentine does with the character in the next few issues. 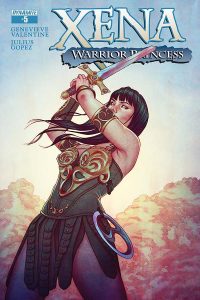 Julius Gopez is solely responsible for the art in Issue #5 and it works remarkably well here. Where the artwork seemed patchy and inconsistent in previous editions, Gopez’ illustrations are so stylised that it adds a dark, gritty element to the story. The colours are muted and moody, and the sketchy quality of the characters adds a certain dynamism to the comic. Even in the dialogue-heavy scenes, almost nothing in the panels are static, and as the series speeds up, this style of artwork seems to match the story perfectly.

Dynamite’s Xena: Warrior Princess hasn’t always been the most consistent of comics, but here, Valentine has really hit her stride. The characters act in ways that seem appropriate to the TV series, whilst also adding complex problems for them to solve. Gabrielle, for example, has some difficult choices to make in the next few issues, particularly as Caesar’s offer could easily result in a Pyrrhic victory. Still, for fans of the franchise, Dynamite’s Xena is an exciting addition to the canon of stories, and with the promise of a live-action reboot in the works, it’s good to know that there’s still a lot of new ground for the characters to cover.