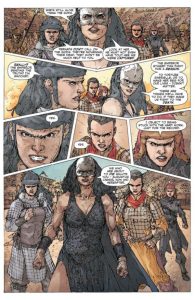 October saw the release of the final issue of Dynamite’s Xena: Warrior Princess. Written by Genevieve Valentine, the 6-part miniseries has been a fun but inconsistent affair, veering in tone between high-camp and high-drama, and struggling to find its feet for the first half of the series. But in spite of its flaws, Issue #6 is a fitting way to end the story, as it showcases the greatest strengths and biggest weaknesses of the original show. Though the series has been exciting and ambitious, it hasn’t been entirely satisfying from a narrative standpoint.

Issue #6 starts with Gabrielle, now a prisoner of Rome, morally conflicted after Octavius’ proposal. As she ruminates on the implications that her decision may have, Xena – dressed almost exactly in her Saba disguise from season six – heads straight to the forum in order to rescue Gabrielle. The way that Xena and Gabrielle save the day feels very in keeping with the tone of the show, and it’s easy to imagine the final pages as part of an actual episode. But while issue #6 focuses mainly on action, it never ultimately feels very conclusive. 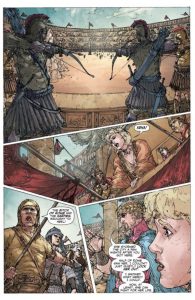 The most annoying thing about the final issue is just how many loose threads there are, with characters seemingly adding nothing to the finale. Seyma the shamaness is the most obvious example of this, whose vatic prophecies dominated the first two issues of the series. Although Gabrielle confronts her about this at the end of issue #6, the explanation that prophecies are hard to decipher seems a little anticlimactic, especially as we literally saw visions of Xena getting her neck severed within the first few pages. Of course, we all know that Xena will survive, but since nothing even remotely similar happens during the course of the series, it’s difficult to find a reason for including these visions in the first place.

But Seyma isn’t the only character who ultimately lacks purpose. Ares, now mortal after the death of his family, has the potential to address many of the comic’s themes – especially because the twilight of the gods in season five was bought about by the misinterpretation of a prophecy. Instead, Ares barely does or says anything, and he could easily be exchanged by any number of other characters. Chilapa and Borias’ daughter may have been good candidates for this, as they also seem underused by the comic’s conclusion. 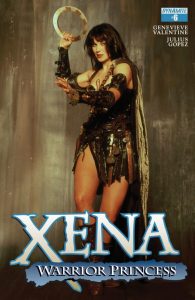 But Valentine’s run on Xena: Warrior Princess had many strengths going for it too, and like the series, this was mainly due to the relationship between the central protagonists. Although the lesbian subtext was a fun way of keeping the audience interested in the 1990s, Valentine explicitly makes Xena and Gabrielle a couple, a refreshing and overdue revelation. They share a long, romantic kiss in the final pages of the comic, and seeing them ride out into the sunset is a gratifying denouement to those unhappy with the finale of the original show.

All in all, Dynamite’s Xena was an enjoyable reminder of all the things that made the franchise great, full of complex female characters who don’t need men to feel complete. Perhaps having more issues would have made this a more satisfying experience overall, but before we get to see Xena and Gabrielle return to our screens – in whatever form that may take – it’s nice to know that there’s still a place in the world for our favourite warrior princess.