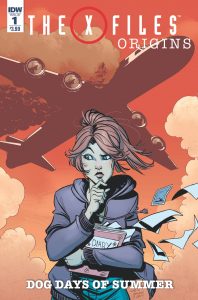 X-Files is one of those shows that may age but will never age out. Sure, the pantsuits are out of style and the clunky cellphones are a thing of the past, but its spooky premise of an existence beyond the veil will always find a home with those that want to believe. With season 11 filming this summer, it’s hard to not to tap into the fandom, most notably with the long time X-Files comic companion that’s currently being handled by the good folks at IDW Comics. Along with the regular X-Files universe, IDW has been releasing a teen friendly version of the series titled X-Files Origins. The work focuses on the younger years of Fox Mulder and Dana Scully, before the two had met on the first episode of season one, and follows their exploits as they explore the weird world around them. Each issue is split in half, with one part narrowing on Mulder and the other on Scully and each story is handled by a different creative team. It’s basically two comics in one!

Though Dog Days of Summer is the second story arc of the series, there is some throwback to the first arc. It’s not detrimental to the experience if you didn’t read it though and there’s a quick paragraph before each story to catch the reader up. The comic starts with Mulders story. Much like the grown version of him, young Mulder is still obsessed with ghosts and aliens and is still on the hunt for his sister Samantha. This time, he’s joined by two friends, Tim and Eric, and the three spend their summer hunting strange things in their town. In Dog Days, as Mulder is shopping with his mother and monologuing about his latest strange experience, he sees a girl stand in the middle of the road about to get hit by a car. He jumps in just in time to save her and quickly realises that she’s deaf. Yet there’s something else about her that bothers him, but it’s not until he sees her standing on a cliff in the middle of the night, does he realise that he’s in for something exciting.

The Mulder end of the comic is similar to a teen version of Stranger Things. Odd girls in the woods, a collection of nerdy guys, and lots of bike riding and sneaking out at night. He’s got a strong sense of justice and tends to leap before he thinks, just like his show counterpart, and his friends are the exact kind of young nerds that he would hang out with, that is, book smart but not an inkling of common sense. There’s not much here on his parents and they act as concerned background characters more than anything else. The story itself is interesting but since it shares its space with a Scully comic, it felt a bit crammed. There are only ten pages for both stories, so everything important had to happen quickly before the end-cliff can be properly revealed and it felt like reading an anthology story instead of its own comic. The art though is fun and leans more cartoonish than realistic, giving the work a proper comic adaption while still appealing to younger readers. It was a great choice for a comic that set in a “younger time” and really proves that the artist understood what would sell the work.

The second half of the comic focuses on Dana Scully. Much like Mulder, she also uses monologuing to set up a scene, though this time through glimpses of her journal versus the voice recorder of her partner. As she’s explaining the strange happenings of the previous week, a resounding crash suddenly rings out through her small sub-sect of San Diego. When she finally makes it out to the site, a crowd has gathered around a smoldering plane crash and in the crowd is a familiar face that still haunts her dreams. The comic also cuts with a side-arc about her father, General Scully, and his continued battle with a shadowy co-worker who works with a mysterious groups of scientists. Determined to find out what they’re really up to, General Scully drops the name of a certain nicotine enthusiast, hinting that he knows more than his co-worker thinks. Are the plane crash and scientists related? How does the face in the crowd fit into all of it? And most of all, what is a young Dana Scully caught in the middle of?

The Scully end focuses a lot heavier on government conspiracies than Mulder does, which fits more with what sort of cases she would handle if she was on her own. Ghosts and demons she can wave off, but anything with a clear human involvement is right up her alley. Her character is handled wonderfully and proves that even a 14 year old Scully still has the no-bullshit attitude and methodical thinking pattern that is reflected in her later years. Yet, despite her rationale, she still struggles with her religion. Part of her wants to believe that there is a benign and loving God and the other half is eager to prove that there is nothing out there. This was another side of her personality that was explored in the show and it’s interesting to see it reflected in someone so young. The story, once again, is a bit short and tends to work in bursts instead of any set up. The art struggles in certain places due to awkward inking, but holds up overall, making for an enjoyable read. 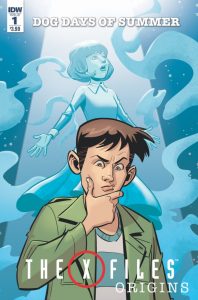 X-Files Origins: Dog Days of Summer is great addition to the X-Files world and thoroughly explores the younger years of our FBI heroes while giving a couple pretty solid mysteries. The only complaint is that both the stories are too short and while it’s commendable that IDW decided to not go for the double cash grab of releasing individual comics, in this case, it might have been beneficial. There’s not a lot of opportunity to learn about the world that agents occupy, just the fast mysteries that occur in it. Any background information ends up coming either from the surrounding environment or previous knowledge of the franchise and if you weren’t already an X-Files fan, the comic would be a lot of nothing. So perhaps it is needed to read the first arc, the “story so far” intro does nothing to build the world. But then again, maybe you just have to believe that there’s world already out there.

Either way, grab your copy on stands now!