Writer-director Kiah Roache-Turner (Wyrmwood: Road of the Dead) is helming a new horror movie that’s got a lot of legs…

The film is called Sting and will centre around a spider. Excitingly, the spider puppet will be created by Academy Award-winning practical effects studio Wētā Workshop, best known for its work on The Lords of the Rings films. 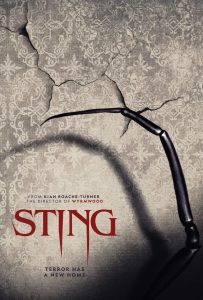 In Sting: “One cold, stormy night in New York City, a mysterious object falls from the sky and smashes through the window of a rundown apartment building. It is an egg, and from this egg emerges a strange little spider…

“The creature is discovered by Charlotte, a rebellious 12-year-old girl obsessed with comic books. Despite her stepfather Ethan’s best efforts to connect with her through their comic book co-creation Fang Girl, Charlotte feels isolated. Her mother and Ethan are distracted by their new baby and are struggling to cope, leaving Charlotte to bond with the spider. Keeping it as a secret pet, she names it Sting.

“As Charlotte’s fascination with Sting increases, so does its size. Growing at a monstrous rate, Sting’s appetite for blood becomes insatiable. Neighbours’ pets start to go missing, and then the neighbours themselves. Soon Charlotte’s family and the eccentric characters of the building realise that they are all trapped, hunted by a ravenous supersized arachnid with a taste for human flesh… and Charlotte is the only one who knows how to stop it.”

Principal photography on Sting is slated to begin in Sydney in late 2022. Sales will commence at Cannes.