Writer/Director David Farr Talks “The Ones Below” 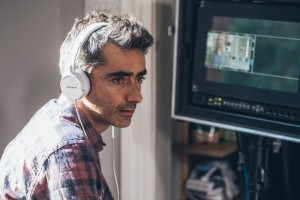 After a prolific career in the theatre world, director/writer David Farr hones in on the anxieties of parenthood in his cinematic directorial debut, The Ones Below to emphasise just how little people living in hustling and bustling big cities really know about each other and to evince the kinds of sordid secrets those living so “alarmingly” close to us may be sheltering.

Clémence Poésy and Stephen Campbell Moore star as a couple expecting their first child who discover a disconcerting difference between themselves and the couple (David Morrissey and Laura Birn) who have just moved into the flat below; also about to have a baby. At first, the two mothers-to-be get on like a house on fire until a tragic accident hurtles everyone into a nightmare of psychological turmoil.

In celebration of tomorrow’s release of The Ones Below, SCREAM caught up with David Farr to talk about the incentives behind his directorial debut and his experience making the transition from stage to big screen…

SCREAM: I understand it was actually the BBC who approached you with a view towards you directing a film. Can you tell us a little bit about how that came together?

David Farr: Well they witnessed me move from theatre into film screenwriting, in particular obviously with Hanna, and I’d written a couple of screenplays either for them or with their knowledge which they very much liked but which were for much bigger films. So they essentially said, “Look, you should be thinking about a project that you could direct yourself, but which would need to be a smaller project as it’s your first film.” And then, quite separately, I was directing a play by Harold Pinter called “The Homecoming,” and I was talking to an actor about parenting and the modern anxiety of parenting and I just went to bed and woke up with the idea of this story in my head which was almost complete in its inception. So I submitted the idea to the BBC and they liked it very much, I wrote the screenplay and things went from there.

SCREAM: What would you say was the most noticeable difference between directing theatre and film?

DF: Well I suppose I’m more of a movie fan than a theatre fan. My parents never went to the theatre at all so I was one of those teenagers who used to hole up with Scorsese or Lynch or whoever and be very happy in that place. I went into theatre really because in the ‘90s film-making in Britain was really tough; you could name on one hand film-makers who were making films with any regularity. By nature, I’m a person who likes to make work and engage with people. In theatre there’s an amazingly productive turnover and I loved it but I always had a yearning to go back to movies so, for me, it’s a kind of coming home really. I felt quite comfortable and it’s not that different of a process as some people might think. In some ways it’s actually easier because the film-making process is much more focused around what the director wants and everyone in the shooting process is there to create material with the director and to carve and sculpt it all into the thing that we will eventually call the film. I can honestly say it was an overwhelmingly positive experience. You have to get used to the pressures of finance. That’s of course the big difference. There’s much larger amounts of money involved and you just have to not let that get in the way of what you want to do.

SCREAM: How much of the film would you say is borne out of personal experience(s)?

DF: Yeah. The initial impetus of the film came out of a conversation I had with another father and the terrible loneliness he had felt when his very young baby had fallen very ill. I think a lot of horror and suspense movies use the child or the baby because it’s such a small, innocent thing that can provoke such extraordinary primal responses in us such as fear and love. There’s nothing like giving birth that creates this sense of uncertainty. You don’t know what’s going to happen and you don’t know where it’s going to go or how you’re going to react. I, like a lot of genre film-makers, am only interested in primal terror; those moments in our lives where we suddenly experience something that we always know is there but we always keep at bay.

SCREAM: So The Ones Below refers to the new neighbours downstairs. How did you decide on the specific traits of this peculiar couple? 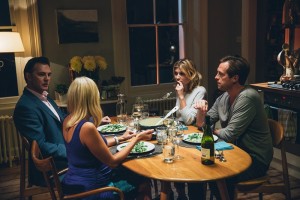 DF: I knew I wanted those two characters to be what I call “floating individuals,” people who haven’t found a home in life for very different reasons: Theresa because of her mother who dragged her around like a backpack and Jon because he’d had all sorts of strange things going on. He’d ended up in China, had a relationship there but didn’t manage to have a child so he floated to Germany. So you get this couple who are floating around the world and who are unable to really find a home. We have these two people who have found each other and their love for each other is so profound and so extreme and potentially therefore aggressive. Essentially, they are each other’s remedy from all of their own personal ills. And then I wanted to contrast that with the upstairs couple where they are much more conventional and more liberal and who we can perhaps recognise more as ourselves in some way.

SCREAM: I’m really keen to ask you about Clémence, who plays Kate. I love this lady ever since I saw her in “The Tunnel.” You could have chosen any actress from the UK but you finally decided on a French native to take on the role.

DF: That was so strange. It wasn’t at all what I expected but I was looking for someone who didn’t put in a performance that was too big or too mannered. Suddenly, Clemence came along and she was willing to screen test for me because she was concerned about her accent – which I didn’t give two hoots about – so I got to work with her for a couple of hours and we filmed it and watched it and there was an internal intensity that no one else had found. She didn’t seem to act it; she just seemed to be it. She seemed to be able to allow the camera to explore her state of mind and I thought it was a very bold performance. It definitely has a certain quality that French actresses do have which is to let the camera come to them more. In this particular role I think it was really helpful for me to find someone who wasn’t so keen on filling in all the gaps. That’s what she’s like on set too. She’s quite a quiet person and she just likes to find her emotional space and where she needs to be mentally and then let me and the camera come to her. She’s very special. 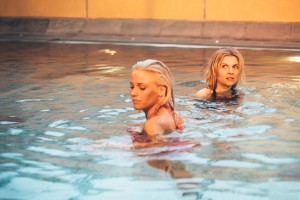 SCREAM: Did you keep the two couples as separate as possible off set to try and add some extra authenticity to the relationships in the film?

DF: We did in a way. We allowed the couples time on their own to develop their own histories. One scene, which I’m particularly proud of, is the dinner scene where they all meet each other and there was that particular quality there of two couples genuinely meeting each other. We didn’t rehearse it that much. I wanted to try and find what was instant and what was immediate and instinctive from the performers and they were very cool with that.

SCREAM: Having come from a theatre background, how did you find working with a cinematographer, in this case Ed Rutherford?

DF: Ed is a wonderful guy. We did prepare a lot. We really did sit down for days and days, together with my wonderful production designer Francesca Di Mottola. Our chemistry was very good and Ed is a straightforward guy, which I prefer, except when it comes to his work he’s an artist and I think that’s a perfect combination. He’s extremely keen to understand everything and I think he’ll become a big star.

SCREAM: And what about yourself? Has The Ones Below got you hankering to get back in the director’s chair again any time soon? 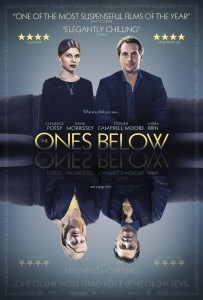 Absolutely. I mean, there’s nothing I can talk about for definite but there are projects ongoing that I really hope come to fruition. Making a film is never easy and you have to be lucky and get just the right combination. But I’m very proud of my first film and I think it’s definitely something I want to do again as I absolutely loved it and I felt strangely more comfortable in the film director’s chair than I ever was in the the theatre director’s chair but I can’t really explain why.

SCREAM: Thank you so much David and I wish you the best of luck with the film and the future.

DF: Not at all. Lovely to talk to you, Howard.

We’d like to thank David for speaking with SCREAM and urge you all to catch The Ones Below as it hits cinemas tomorrow, 11th March. In the meantime, we’ll leave you with a trailer for the film…