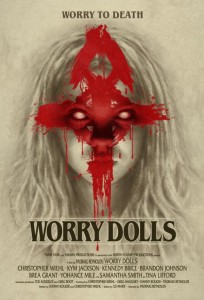 Studiocanal have announced that they will be releasing cult/possession/witchcraft/serial killer flick Worry Dolls on DVD in the UK on June 27th.

The mashup of horror sub-genres is directed by Rites of Spring director Padraig Reynolds, who looks to be sticking with that film’s greasy, rural southern aesthetic.

“In the aftermath of the hunt for a notorious serial killer, Henry Leonard Bale, a peaceful town erupts in a chain of random, brutal murders. Detective Matt Williams soon discovers these killings are linked to an ancient set of Worry Dolls that was gifted to Bale when he was a boy. Now, with a curse unleashed upon the town and his young daughter’s life hanging in the balance, Detective Williams is pitted against the clock to find the dolls and break their curse in order to save her life.”

Reynolds also produces Worry Dolls together with Greg Haggart, Christopher Wiehl and Danny Kolker from an original script by Kolker and Wiehl.

Check out the rather cool trailer below.