The story takes place in a small rural community, down on its luck. Our protagonist, Arch, is desperately trying to make enough money to keep his grandmother and himself in their trailer. He’s a naive, sympathetic, and good hearted character who you can’t help but root for. He is easily led and is complicit in some pretty terrible deeds. Trust me, he goes through some bad times, even before the worms. To make money he’s forced to work as general dogsbody at a diner, all of his tasks unpleasant. Then to supplement his pittance income he joins two scumbags, the Sawyer boys, on their less than savoury side jobs. Most of these jobs involve finding meat for said diner.

For something of a splatter book, it is actually a slow burn. Well, slow burn is not the right phrase because plenty of things happen in the first half. It’s just that the gore and mayhem doesn’t really hit until the second half of the book. I never felt bored or wanting the story to pick up pace. The lengthy build up allows there to be a good bit of background on the characters. The characters are a little stereotypical, with the redneck Sawyer brothers, Junior and Bert, the shady restaurant owner, Fat Ernst, people called “Heck” and “Slim,” and it goes on. The most important factor is that the cast of characters is entertaining and fun. Fat Ernst was my favourite, with his larger than life personality and stature reflected in his whale of a Cadillac. Fat Ernst is a selfish asshole who again and again shows that there is no corner he won’t cut to make some money.

The big reveal of the origins of the worms happens about two thirds of the way through, and it’s a good explanation. The chaotic second half is actually where the book seems to drop off. The pace picks up and it all seems a but rushed. I found myself caring less about what happens to the characters and it got less interesting. 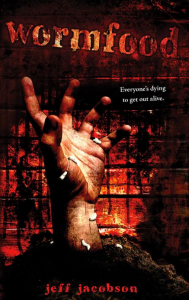 Throughout the first part of the book there were hints of the supernatural regarding the Sawyer’s grandmother. Sadly nothing convincing ever came of this. Her reputation and the fear she generated don’t seem to have any legitimate basis. The action also suffers from the bland small town setting that only seems to consist of a couple of locations.

The descriptions are strong when it comes to the worms. They are disgusting. Now, let me get to the gore. There is a fair bit and some good worm related body horror, but not really as much as I would have liked. The focus shifted from the threat of the worms to the squabble between the Sawyers and Fat Ernst. It all peters out for the conclusion.

It feels like an opportunity missed. In my estimation, all books in this slimy gross out genre have to compete with the benchmarks set with Shaun Hutson’s Slugs and James Herbert’s Rats series. Sadly this book doesn’t do it.