You might not know Eric Red the author, but you’ll certainly be aware of his screenwriting. He is best known for two horror classics, Near Dark and The Hitcher. The Wolves of El Diablo is the follow up to his first book in The Men Who Walk Like Wolves series. The first book, The Guns of Santa Sangre, is quickly recapped in the opening and this book takes place shortly after. I hadn’t read the first book, but I didn’t feel lost or like I was missing anything while reading the second.

A group of werewolves enslaved and fed on a small Mexican town, Santa Sangre, until they were defeated by three American gunmen. Now the sister of the slain werewolf leader is looking for the gunmen with her own gang of wolves to enact some vicious retribution. The cowboys run in to trouble while robbing a train. They meet unexpected resistance and the werewolves catch up with them. From there things go from bad to worse.

The setting of the Mexican desert and small towns gives the book a different sense of place. Dialog in the book is interspersed with Spanish words. It’s a spaghetti western with werewolves and very much looks the part, from the dialog to the action. 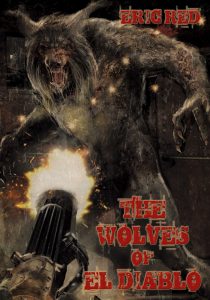 Our three American cowboy heroes are rogues, criminals, and mercenaries. Despite all that, they are a likeable bunch, if not too deep. They are full of bravado and wise-cracks. The two female characters in the book steal the show. Pilar is a brave local woman who fights with the cowboys. Azul is the powerful leader of the werewolves. She is strong, vicious, and single minded in her mission for revenge. There is a huge amount of build up to the final showdown – probably too much. I couldn’t help but think of the A-Team, locked in a garage or something, frantically building. It’s something of a siege narrative as the clock ticks on the fading day and rising moon. The action gets crazy when the silver bullets start flying and the werewolves keep coming.

It’s a simple, fast paced, action packed story, with certainly more action than horror. When the werewolves are present there is plenty of gore – lots of biting and tearing of flesh. It’s cowboys versus werewolves on a speeding steam train. That’s all you really need to know. If that sounds good to you, you’ll like the book.