Synopsis:
Lakeview is a quiet enough town. It’s had its fair share of woes and its fair share of successes. A group of friends gather for a few drinks, a week before their 10th High School reunion, anticipating a night of drinks and laughs. They didn’t expect the werewolf.

With seven people dead and four people severely injured, the town tries to recover from the disaster and regroup for the reunion.

So another werewolf story. There seems to be a lot of them about lately. Maybe it’s the season. Maybe I have just noticed more of them because thanks to books like this, I want to read more of them. I’ve never been a real fan of werewolves but when a story is written like this then I just can’t resist.

There are a whole bunch of interesting characters in this one. Our main ones are wonderfully written and you immediately get the sense that these people are real and have actually been living in each other’s lives instead of just being words on a page.

Duane and Savanah would be the main “normal” characters battling the evil. Duane is overweight, over qualified and over shy. He is an all-round decent lad but not everyone’s favourite person. Savanah is the object of Duane’s affections. She doesn’t necessarily want to be, but is happy to be his friend. She has a young son called Jake who is her world and no one can seem to get close because of that fact. Savanah’s friend and baby sitter, Barb, is also one of the good guys and to be honest was one of my favourite characters in the story even though she is not mentioned as much as others but steals the show for me when she is on the page. Superbly dry and funny and hard beyond belief. I loved her.

Glenn, Weezer, Joyce and Melody are the four who were injured at the first party. Glenn is a ladies man. At least he was before the change. Now he just doesn’t know what he is. Weezer is a sleaze ball. At least he was before the change. He seems to have swapped places with Glenn. Joyce is the town librarian. She is a stereotypical librarian. Quiet, smart and a bookworm. Not for long though. Melody has, and is still having, a horrific life of torture and abuse from her father and brothers. This could be her time to shine and get revenge. All four of these characters are again superbly written and you suffer everything they are going through during this tale.

There are obviously others involved. Smaller parts are played and the story is filled just right with a collection of different personalities.

The plot is not unlike some of those old horror films you might have watched when you were younger. Basically the werewolves come to town and it is a battle for the good to survive against the evil. The difference with this story is the fact that people know from the outset that they are dealing with werewolves. There is initial disbelief at what they have witnessed but at the same time an acceptance of what is happening and a desire to stop the evil in whatever way they can. The biggest difference for me was the fact that the werewolves themselves have character. They aren’t just huge ferocious beasts tearing people apart, although they do that a lot, they have their own individual traits and attitudes and it was great to be able to recognise this in them.

The four “injured” characters feature heavily throughout the story. This is the difference I mentioned earlier that makes this story for me. You spend a lot of time with them individually as they come to terms with the changes they are going through and what they need to do to survive. They all have different triggers that make them “change” and it is fascinating reading what effects them and how they deal with it. Some of them band together and some of them just want to go it alone and cause havoc wherever they go and some of them just can’t seem to understand or deal with what they are until the chips are down.

As you get to know these people it will click with you just how bloody damn good the writing in this book is. I had to remind myself more than once that this is a work of fiction. The emotions and the heartache and the roller coaster ride that these characters have to deal with is so convincing that you will believe it is true. It’s almost like Mr Janz has some insider information as to what happens when you become a werewolf because his descriptions sounded spot on to me and extremely convincing.

The last part of this story is what I would describe as the “battle scene”. It all comes together in an almighty battle between the “normal” people and the werewolves running amok in a theme park. This is just superb. It’s one hundred miles per hour. It’s full of blood and gore. It’s full of sections where you will have to remind yourself to breath. It’s full of parts that will make you gag and will make you want to cry. At times you will be rooting for both sides and times you will be screaming for certain characters to be wiped off the face of the planet. Jonathan Janz has a knack of drawing you into the story so much that you can’t help but get emotionally involved yourself. 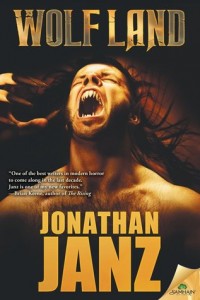 Be warned though – this tale is not for the faint hearted. Normally in a book involving werewolves there is some blood and guts, some of it brutal. Wolf Land is not a variation on a theme of some sort of Twilight movie or book. Wolf Land, at times, is brutal. There are some very harrowing scenes. I applaud Mr Janz for having the guts to go where many would fear to tread, after all, if this were real then the things he describes would happen. People just don’t like to think of them happening. The reason I’m applauding is because even though some of the things that happen made me cringe and want to cry at times, they weren’t just thrown in for the “shock” factor. They weren’t just there for the gratuitous spreading of blood and guts all over the pages. They were there because they would happen and they were described in such a way to make you realise they happen but not over exaggerated for effect. When you read this book you will be convinced everything in it could happen. It is that effective.

To summarise: A werewolf story with feeling. Characters that you could be living next door to because you believe everything they are going through. Flip the page and the blood sprays all over your face. Fast, fun and exciting. If you like your horror you will love this. If you like werewolves, you will think you have died and gone to heaven. Highly recommended.