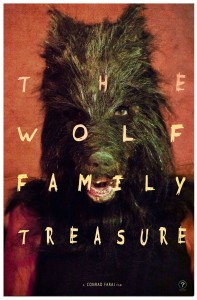 Due to hit the festival circuit later this year is The Wolf Family Treasure, a horror-thriller from director Conrad Faraj, the first trailer for which landed this week.

Faraj, who has a number of genre films currently in production, also scripted from a story by himself and Roger Jones. The story concerns a group of friends who learn of a supposed treasure hidden within the estate of a murderous family, said to practice witchcraft.

Check out the trailer below, plus this striking poster art.