The movies are focused mainly on the victims, so right at the start, it was hard to get used to seeing the world from Mick’s point of view. It’s the mystery and not knowing what’s going on in his head that made him unpredictable and gave him his power as a villain. Origin, as the title might suggest, shows you Mick’s roots from his childhood to his beginnings as a burgeoning killer. His upbringing and father have something to do with his mental state, but he was a mess before that trauma, from an earlier childhood incident.

For the first part of the book he has some humanity. He tries to fit in working at a sheep station, before slipping suddenly into violence. No matter how hard he tries, he is unable to refrain from taking life, and from killing he draws his strength. However, the sudden transition from restraint to lunacy was too jarring and didn’t quite work for me. 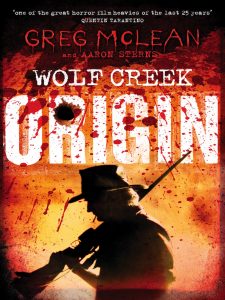 Things change drastically for Mick when a witness to one of his earliest murders comes forward and challenges him. The witness, Cutter, works at the sheep station, and also happens to be a serial killer. Mick kills him, but now has a mission to find three other serial killers in the region before they can turn over evidence on him to the police. This sounds like a fantastic premise to set up the rest of the book, but it doesn’t really pan out as excitingly as I’d hoped. By the end of the book Mick’s violence and cruelty are ratcheted up and he appears to be fully in his stride as the killer we see in the movies.  There are some inventive and fun kills in the final third. There is no major cliffhanger; just a set up for the follow up book, Wolf Creek: Desolation which has Mick serving in the military in Vietnam. All in all, with such a great character already established, this was a bit of a disappointment and I’ll probably skip the next book.