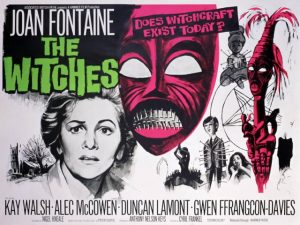 The Witches (released internationally as The Devil’s Own in 1966) is an oft-forgotten entry from Hammer Films. It still has all the common tropes that we’d expect to see – a ruined church, a quintessentially English setting, and a melodramatically gothic script – but the film is closer to the folk-horror movement than the studio’s other offerings in the 1960s. A sort of predecessor to films like The Wicker Man, Witchfinder General and Blood on Satan’s Claw, The Witches boasts a fantastic cast and a tight, suspenseful script, even if the film stars to unravel in the final act.

Joan Fontaine plays Gwen Mayfield, a schoolteacher who has suffered a mental breakdown after a tribal rebellion in Africa where she was working as a missionary. In an attempt to get her life back on track, she takes a teaching job in the sleepy English village of Heddaby, but while the town appears to be the perfect place to recover from her traumatic experience, Mayfield soon discovers that all is not quite as it seems, and begins to suspect the villagers of practising a form of witchcraft.

The premise itself is an interesting one, with Mayfield’s suspicions informed by the fact that she was terrorised by witch doctors back in Africa. She is never sure if the flashbacks she suffers make her more suspicious of the people in Heddaby, that she is being swept up in a kind of post-traumatic hysteria. The problem lies in Nigel Kneale’s script, who seems to be too aware of the viewer switching off if not enough is revealed. Granny Rigg is shown to be a witch from her first appearance on screen, eliminating some of the tension that Mayfield’s misgivings have created. Similarly, the head of the coven is revealed about an hour into the film, meaning that the finale (a sort of pseudo-black mass in the ruined church) loses a lot of its potential impact.

As a result, the scariest thing about The Witches is Joan Fontaine’s haircut. The tension and atmosphere is virtually non-existent by the half-way point, and the finale – complete with interpretive dancing and some questionable fashion choices – seems more laughable than genuinely frightening. The reveal of the head witch arrives prematurely, giving Mayfield more than enough opportunity to find out how to stop the coven’s ritual. When she does so – by cutting her arm and therefore drawing blood in a consecrated place – the final scene is rendered awkwardly anticlimactic.

But in spite of all this, The Witches is about the most fun you can have watching a horror film. Take the opening scene, for example. Mayfield’s school is sunk deep in the African jungle, and her superstitious aides are warning her of the danger of the rebellion. When they re-enter the classroom, a sacrificial knife has been lodged into her desk. She tries locking the door but a witch doctor, wearing a primitive body-sized mask, bursts into the room. Mayfield screams; the drumming increases; and the screen dissolves into plumes of red smoke. Hammer Films were never known for their subtlety, but this mixture of high-camp and horrific imagery is what they have always done best, and the first half of The Witches shows this off to great effect. 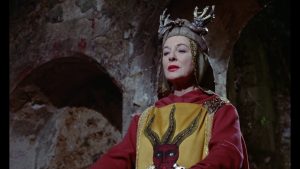 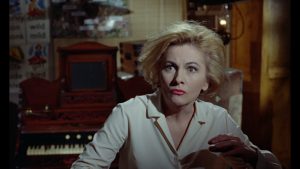 It should also be said that the cast of the film are all uniformly fantastic. Joan Fontaine, who had never before appeared in a horror film, does an admirable job of playing Gwen, veering between buttoned-down good sense and wild-eyed hysterics. Kay Walsh plays Stephanie Bax, a journalist based in Heddaby. Bax is probably the most likeable character in the film, offering some interesting insights into the psychology of witchcraft. The rest of the cast excel at creating the sense that things are a little too good to be true in Heddaby, but Martin Stephens – the brilliant child actor from Village of the Damned and The Innocents – is criminally underutilised.

Is The Witches a great film? Not really. Will it be remembered as one of the best movies that Hammer ever made? Certainly not. But The Witches, for all its flaws, is still my favourite Hammer film of all time. Norah Loft’s novel (on which the film is based) is far more effective at conjuring a sense of dread and unease, but the excellent cast often make up for the strange structural choices made by the studio. Though it’s far from perfect, The Witches is fun, fast-paced and boasts some truly excellent performances. For fans of other pastoral horror films, this comes highly recommended.