The first poster has been unveiled for an intriguing upcoming horror film that may have so far passed you by. Witchula is co-directed by Marcus Bradford and Pat Kusnadi, and features a cast headed by some familiar faces to the world of horror. 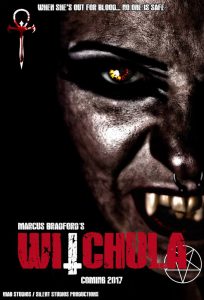 Maria Olsen (Starry Eyes, Southbound, Paranormal Activity 3) plays the title character, a witch/vampire hybrid who stalks a remote town on an exotic island. Bill Oberst Jr. (Valley of the Sasquatch, Krampus: The Christmas Devil) and The Exorcist’s Eileen Dietz also star in the film, along with Marilyn Ghigliotti (pictured in Murder Hill). While Ghigliotti has appeared in a number of horror and sci-fi films in recent years, including Dead and Gone, Starship: Rising and Lake Eerie, she will perhaps always be best known as Veronica in Kevin Smith’s Clerks.

Witches, werewolves and vampires will feature in the film, which follows a group of college exchange students who become the target of Witchula, who wants something they have in their possession.

Directors Bradford and Kusnadi also wrote the film, as well as producing alongside John R. Blythe (My Amityville Horror), Kirsty Richardson (Virus of the Dead) and Jason Wright (Blaze of Gory).