Synopsis:
Suburban teen Claire (Joey King) is given an antique music box by her father (Ryan Phillippe). Soon after, Claire discovers she has been granted seven wishes then uses them to make her wildest dreams come true but with devastating consequences. 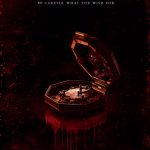 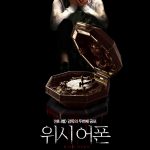 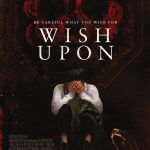 John R Leonetti’s previous feature, Annabelle, failed to fare as well as The Conjuring film/franchise it spawned from despite a couple of decent, creepy moments. Sadly his follow up, Wish Upon, is an even shoddier slog. Basing the story/concept around an object/McGuffin, instead of a lone antagonist, presents an interesting challenge for Leonetti and writer Barbara Marshall which doesn’t pay off, as the creative partners fail to extrapolate the concept into a compelling enough storyline.

Wish Upon judders awkwardly through a slovenly set-up, made partly bearable by desperate editing, before stammering into a wonky confrontation then buckling under its own faux pas during a monotonous finale. The film is hindered further by all too familiar genre blemishes (flat characters, stock dialogue, hammy acting) with derivative death scenes, insipid set pieces and an inability to efficiently thrill or frighten.

Following a pithy prologue the story snaps to the present day: a generic suburban setting where protagonist Claire jolts from a nightmare. From there we meet her cardboard college friends, who aggravate, whine and queue to be killed/maimed/mocked accordingly. Claire is established as flawed and complex while her vacuous clan are incredibly shallow, flaunting fads (apps, slang, fashion, social media updates) with rasping buoyancy that (appropriately) makes you wish they were dead.

The patchwork story dissolves into derivative swill after Claire’s trash raiding dad (Ryan Phillippe) presents her with the cursed Chinese music box (a cross between the Lament Configuration and a landmine). Claire discovers the device grants wishes and uses them to improve her life (and make others’ worse) in the hope of finding happiness. All hell breaks loose, some of the supporting cast are injured/ disposed of while the performances and contrived plot wilt into “so bad it is unintentionally hilarious” territory which gradually worsens when things go further south, sour and supernatural.

Wish Upon frequently feels like template American college schlep with cloying ideals and plot cogs borrowed from horror franchises like Final Destination, Rings and Hellraiser. Claire conversing with her mechanism also slightly recalls the rapport between Seymour Krelborn and Audrey 2 in Little Shop of Horrors (even though the box is for the better part inanimate). The story fails to go anywhere as interesting as it could have, bar introducing some new, sadly expendable supporting characters. Sheralyn Fenn turns up as a Claire’s friendly neighbour who just wants to see her find love and settle down but she is soon proved superfluous.

Claire later sets out to investigate the box’s origins which leads her into a subplot involving Chinese mysticism but the story skirts over its intriguing new themes without confidently exploring or utilising them. The cast struggle to stretch their chops when revulsion unravels and, combined with the countless other slapdash components, makes Wish Upon reverberate as an irrefutably bungled mess that totters wounded from the start before deteriorating into utterly repugnant paranormal guff.