Announced back in May, Winnie the Pooh: Blood and Honey—a dark retelling of the beloved children’s tale—has got an official poster that warns “this ain’t no bedtime story.” 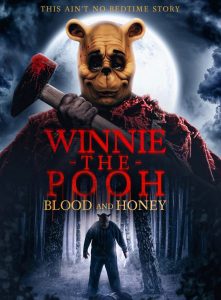 The poster sees Pooh wielding a bloody sledgehammer while Piglet holds a knife. In the slasher film, the duo go on a rampage after Christopher Robin goes to college and stops feeding them, forcing the animals to fend for themselves. However, while A.A. Milne’s original Winnie the Pooh stories are now in the public domain, making this film possible, the characters of Tigger and Eeyore are still under copyright and will not appear.

Winnie the Pooh: Blood and Honey was written and directed by Rhys Frake-Waterfield. The cast includes Amber Doig-Thorne, Maria Taylor, and Danielle Scott.