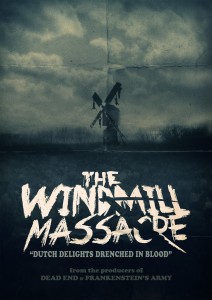 Synopsis:
A group of tourists head on a bus tour to some of Holland’s most famous windmills, but things turn sinister when the bus breaks down and members of the group start to disappear.

It most definitely is no Texas Chainsaw Massacre, but there is quite a bit to love in this Holland-set flick featuring a scythe-bearing slasher. It’s packed full to the brim with clichés, over-sentimentality and its journey is far from unpredictable, but beneath this mostly familiar façade there is an unmissable attempt to add a bit more pizzazz to the otherwise mindless killing of tourists abroad.

As we are introduced to our group of tourists we learn of their various circumstances and what has brought them to Holland. Our protagonist – or Final Girl, if you’d like – is Jennifer (Charlotte Beaumont), who is running from her home in Australia after a tragic accident. She is the first to notice that something is not quite right – mainly because she witnesses the gruesome amputation of Jackson, a member of the military’s (Ben Batt) legs courtesy of our killer – but, also because she’s the one the other characters are least likely to believe. Her dramatic cries about Jackson’s murder amount to nothing – in the beginning, anyway – and are labelled as “hysteria” and “madness” after she is caught with a bottle of prescription pills. This is one hell of a problematic and, quite honestly, shockingly stereotypical, outdated and offensive representation of the leading lady and I was surprised that she wasn’t called a witch and thrown in the river. However, it’s all for good reason, because obviously, it’s not too long before everyone else bears witness to the Jason Voorhees-esque killer stalking their every move and it is they who are revealed to be truly crazy. 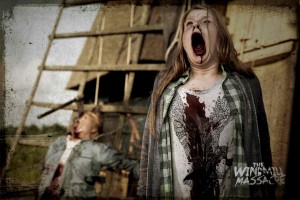 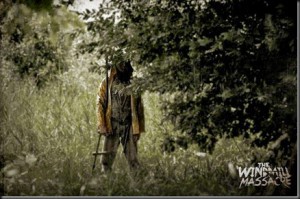 The biggest praise for this film comes with its attempt to add more to the slasher genre; this group of people aren’t your typical set of young folk who are out looking for sun, sea and sex. They’re all very different people from very different walks of life with a couple of skeletons in their closet. This prevents the film from falling too hard into the face of complete predictability and a territory that is littered with clichés. That isn’t to say that some of the sub-stories aren’t a little too common – the struggling father-son relationship is particularly clichéd – but, at least there is an attempt to add variety to its characterisation and that’s rare for a slasher film, let’s be honest. Additionally, there is actually a reason for why these characters have all wound up at the same place at the same time, so the film’s depth expands from the characterisation through to the progression of the story itself. Rather than being a simple, paint-by-numbers flick, The Windmill Massacre borrows elements from the slasher, supernatural and mystery genres, creating something that is, to an extent, quite unique. The parts themselves may be quite familiar, but the way that they are pieced together becomes an effective recipe for a genuinely surprising and violent, gory treat. 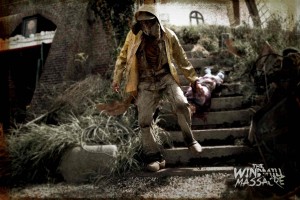 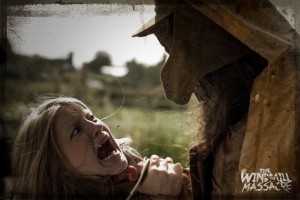 The dedication to carrying out mega violent and creative kills is another reason why The Windmill Massacre gets a thumbs-up from me. As it edged away from its shaky start that suggested it was to be nothing more than another low-budget and generic horror film, it found its feet and its stride, delivering not only a promisingly original story, but one that offered an abundance of grisly deaths. And that’s something we all want, right? It’s far from a spoiler to tell you that most of the characters die in this film and, if anything, you’re going to be ecstatic to see them all knocked off one by one, because boy, aren’t some of them annoying? The film used excellent prosthetic effects and it’s always a joy to see real, practical effects over lame CGI when someone is being gutted or beheaded. Again, this gives The Windmill Massacre an edge over many recent horror films, because you can feel its determination to deliver gory shocks, rather than choosing cowardly, cheesy jump scares.

The Windmill Massacre is far from perfect and some of its more trite ideas may be a problem for some, but there is still a plethora of enjoyment to be had with this blood-splattered and thrilling journey into the dark side of the Netherlands.