Win A Copy Of Warrior King 2 On DVD 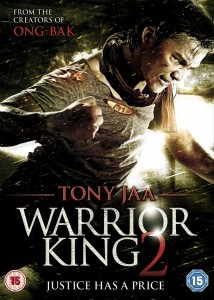 Bone-crushing fights and blood! Warrior King 2 is out on UK DVD on September 1st 2014. We have 5 copies of the new release to give away to 5 lucky SCREAM MAGAZINE Subscribers To enter, email your name, address and SCREAM Subscriber number to: media@screamhorrormag.com (please make the subject heading ‘WARRIOR’) on or by October 10th 2014 and all entries will go into a lucky draw and 5 Subscribers will win a copy.

Synopsis:
When notorious local gangster Boss Suchart is brutally murdered all evidence quickly points to Kham (Tony Jaa) who was the last man to see him alive. With Suchart s equally infamous nieces vowing revenge, Kham decides to flee seeking refuge in an underground fighting ring run by ruthless crime lord LC (RZA) in order to find the real culprit and clear his name. However, when LC enlists Kham to his elite squad of world-class fighters for a secret mission he soon discovers that clearing his name might be more difficult than he once thought.