I can’t stand to hear a grown man scream… 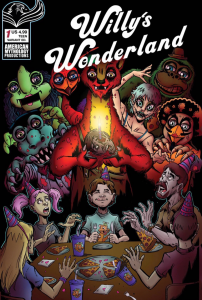 Earlier this year, Nicolas Cage kicked animatronic ass in Willy’s Wonderland. The film featured a series of flashbacks detailing the unsavoury backstory behind the seemingly innocent family entertainment centre, which was (spoilers) owned and operated by brutal killers who transferred their souls into the animatronics when the cops got wind of their crimes.

Now, that backstory will be fully fleshed out in an upcoming prequel comic from American Mythology Productions!

Artist Puis Calzada will be doing the pencils and inks for the comic, which hits shelves this October. Check out this cool teaser art, featuring the less-than-friendly animatronic gang!