William Froste is Another ‘Expendables of Horror’ 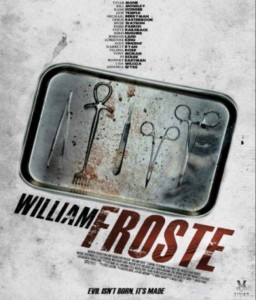 A number of upcoming films seem to be gunning for the unofficial title ‘Expendables of Horror’ at the moment, cramming as many iconic genre actors into their casts as possible. The in-production Motel 66 has secured some big names, as has The Mangled. Most likely to make the moniker stick is Harrison Smith’s Death House, which features a frankly unbelievable line-up that features usual suspects Kane Hodder, Bill Moseley and Michael Berryman, as well as Dee Wallace, Barbara Crampton, Danny Trejo, Camille Keaton and, well, the list goes on. Matching Death House in terms of horror credentials though, is William Froste, currently in production for Vision Films.

Natalie Bible directs William Froste, which is described as “the ultimate dichotomy of innocence vs. evil that will leave an audience questioning their own moral convictions and seeking answer.” Having already described their film as the “Last Supper” and indeed, “Expendables” of horror films, Vision Films are taking it to Cannes this summer. With Death House headed our way in October, and a late-2016 release expected for William Froste, we’ll see who can take that title.