William Friedkin’s Killer Joe is a work of deranged genius. Oppressive, enraging, deeply troubling and blackly (really blackly) hilarious, the 2011 Matthew McConaughey-starrer is possibly the best film the The Exorcist/ The French Connection director has made since the ‘70s. Exciting times then, with Indiewire reporting that a TV series based on the film is in development.

While McConaughey – who seared the screen as sick, sadistic hitman Joe – is not set to return, Friedkin himself is developing the show, alongside producer Bobby Maresco (Million Dollar Baby). The series will provide a new take on the film’s premise, relocating the action from East Texas trailer parks to upper class Houston, and with Joe not only as a hired killer, but the chief of detectives. 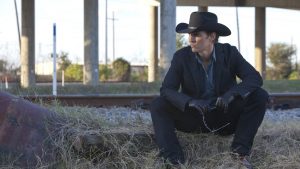 “It’s set among the millionaires and billionaires, who have their wives or business competitors killed,” Friedkin (pictured) said. “Joe is a hired killer who frames bad guys for the murders who can’t get arrested for something else, or he makes them look like suicides…He becomes a kind of avenging angel in the series because he doesn’t just kill anybody for hire. He has to feel that guy in some way deserves to go.”

EOne is currently in talks to produce the show, which Friedkin first talked about in 2014. Casting has not begun yet.