I WILL ROT WITHOUT YOU: Book Review

Since his girlfriend, Gretchen, left him, Ernie’s life has taken a downward spiral. She used to take care of the apartment. Now it’s infested with roaches and there’s an insidious mould growing in the bathroom. His battle with the pervasive roaches takes a turn. He wakes up one night to an organised procession of roaches feeding him mould. From then on he begins to change and rot. Sticky gooey body horror ensues as he slowly falls apart. He’s met the leader of the roaches, the one who organises them and who has become his guide for the decomposition he’s experiencing.

This is a bizarro book, and so as expected things take some unusual turns and there is some pretty insane and vivid imagery. There are numerous subtle but unsettling encounters that Ernie has with people, especially those who live in his apartment building. A jealous boyfriend who sews his body parts to his girlfriend as a sign of his love. A neighbour with a deceased wife in the living room. The characters are all so nutty. One of my favourite parts of the book was the interaction between Ernie and his landlord when he requests an exterminator. The landlord is a hilarious asshole. Really, the dialog throughout is engrossing and entertaining and is one of the strongest aspects of the book. 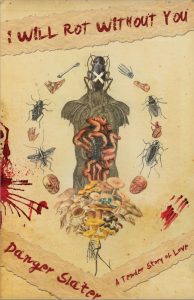 There’s an off kilter, dream-like logic to things and you just have to go with the flow. None more so than with Ernie’s journey. He’s pretty accepting of the fact that body parts are falling off and of the bizarre experiences he’s living through. This book is really gross, with more decomposing flesh and general goo than you could ever ask for. If you have any problem with roaches, this will put you in hospital. Despite the nature of the book it’s ultimately about letting go and finding love. There’s a beauty beneath the rotten flesh.