There will be no more American Horror Story for Jessica Lange

After appearing in four seasons of the hit FX show American Horror Story, actress Jessica Lange has confirmed that she will not be starring in any more. In an interview with Charlie Rose she stated, “I had four years with that. Four seasons and each year was a marvellous character. But no. Sometimes you come to the end of something.” 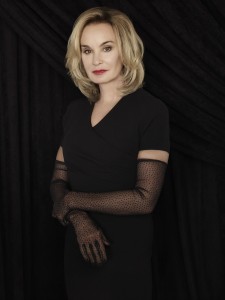 Although sad, this news is not surprising and the love of her fans is not going to persuade her to return. Since leaving the fourth season of AHS, she has starred in a theatre production of Long Day’s Journey into Night with Gabriel Byrne, Michael Shannon and John Gallagher Jr., and has roles lined up in a Fox anthology project called Feud with Susan Sarandon, as well as comedy drama Wild Oats from director Andy Tennant.

It may be the confirmed end of the road for Jessica Lange, but American Horror Story is showing no signs of slowing down. Despite the mediocre viewing figures seen in Season 5’s Hotel, the show will be returning for a sixth season, but we’re not sure when and we’re yet to know what the title will be. More as it comes!