It’s nearly time to begin the annual viewings of such seasonal classics as Silent Night Deadly Night, Black Christmas and Christmas Evil, not to mention the worthy additions to the festive horror tradition that recent years have given us. It’s a tradition that looks unlikely to be going anywhere, and the latest flick looking to make it into horror fans’ regular December rotation is Mike McMurran’s debut feature, Secret Santa. 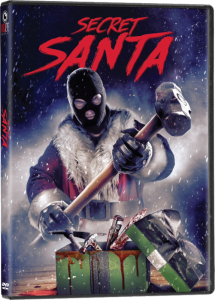 The Canadian slasher throwback was written and directed by McMurran, and stars Bite’s Annette Wozniak alongside Geoff Almond and Keegan Chambers, both of whom appeared in McMurran’s 2012 short Demon Bitch.

Secret Santa tells the story of a group of eccentric college kids, struggling to get through the hectic exam period. A liquor-filled Christmas party is planned to ease the stress. They plan to toast the end of the semester with a Secret Santa exchange. Little do they know, a killer is in town and has a special present for all the girls and boys. Will they dare to open their presents?

A retro, blood-drenched love letter to the seasonal slashers of decades passed, Secret Santa will be decking the halls when it is released on DVD and Digital HD on December 13th, through Wild Eye Releasing.