David Gosnell’s The Wielder: Betrayal is the first instalment of a planned six stories centred around the immortal protagonist, Arthur MacInerney, and the burdens that come with his endless existence. Cursed with the ‘gift’ of not being able to die, Arthur is forced to watch those he cares about grow old and pass away while he remains ageless and bound to remain for the rest of all time.

But it’s not all doom and gloom for Arthur; he does have eternal companions in the form of the demons and fantastical creatures that dwell in his soul, which he can summon as his will dictates to do his bidding. His servants include a succubus, a demon sorcerer, a fairy, a leprechaun, a feline and a Hellhound, all of which bring their own unique powers and skills to his arsenal. However, he finds himself in trouble when he falls for a setup which leads to his arrest by a supernatural police force for a crime he didn’t commit. 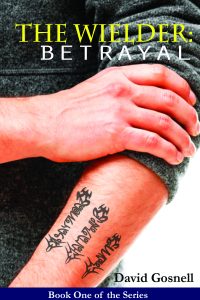 Betrayal is an engaging mystery that brims with imagination and entertains throughout. As the inaugural entry of the series, it accomplishes everything it should as it introduces us to a main character strong enough to build a longstanding story around, taking place in a world you’ll want to spend time in. The lore is spectacular, and Gosnell has laid the groundwork wonderfully for future expansion in this universe. Fans of fantasy will love it.

Overall, The Wielder: Betrayal is an enthralling mystery thriller with a fantastical twist, full of twists and turns that will keep you guessing throughout. All in all, I found it to be more than satisfactory in every department and I can’t wait for the follow-up to find out what happens next. In fact, my only regret is that I discovered the book early as it means I can’t dive into the next chapter straight away.