They are all deadly!

And this is why you can find them inside Trivia Obscura™+Do You Know Darkness?! 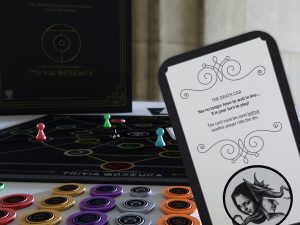 Alongside with pawns, dice, a gameboard and a thousand questions that flirt with the dark and the macabre, in a truly original way! Oh, and there are zombies too! Loads of them! And vampires, werewolves, nameless things that crawl in the dark…Did we mention the Great Cthulhu?
So! If you watch horror stuff faster than Netflix churns them out. If you have painfully experienced the axiom, that one should always tie up the boots FIRST and THEN the corset. If your garage would make Paracelsus green with envy and if… your neighbours curl up in a foetal position every time you pump up the volume…

PERFECT!
Trivia Obscura™ is the board game that allows you to bask in the glory of your dark existence and… rub your poser friends’ noses in it!

Cinema, music, video games, science, history, lifestyle, literature, the occult and many – many more carefully selected topics that flirt with the dark, give you all the juicy left-field bits of info you so much crave! They all meet on the board of Trivia Obscura™, the first game of knowledge and strategy for the lost ones!

But why Trivia Obscura™?
Because we are utterly tired of playing meaningless trivia games on the reproductive circle of the Galapagos turtle! Boring! A bit of Gore on the game-board, never did any harm!

And how do you go about playing it?
Well, atmosphere is very important! Light some candles, dress up, put on some music that makes you feel like flaunting your dark side… anything that works for you! Gather up your friends and let the game begin! The player most clad in black goes first! Attention! Socks count as well! Roll the die and start moving on the board! You can choose between 8 question categories (Houses): House of Blood, of the Occult, of Lifestyle, of Science, of History, of the Arts, of Music and House of Death. Unlike other knowledge-based games, in Trivia Obscura™ you get to pick which category is closer to you and your interests. For each correct answer of your House, you place a ring marker element on a question spot. Once a spot is fully claimed, none shall pass over it, but you.

Is that all?
Of course not! Life is not fair, and neither is Trivia Obscura™! This is why the infamous Carta Obscura cards were introduced to the game. It is a special power card category, that if used correctly can turn the game upside down! Players do not only have to rely on knowledge but also on their wits, to expand their dominion on the board, and block their opponents! So! Grab, stab, steal, block, do what thou wilt, as long as you get to win! Show No Mercy! Unleash your inner Machiavelli, claim all 3 spots of your chosen House and crawl your way back to the Dungeon Market! The Crown of Darkness is yours!Think this is easy?

Who can play Trivia Obscura™?
One of the special things about Trivia Obscura™ is that anybody keen on board games will deeply enjoy it! Ok, we know that people that are into horror/metal/punk/goth /occult culture will love it! But the main purpose of the game is to provide fascinating information to all players, not just useless name-dropping! Some Houses are more targeted, such as the House of Blood which is directed towards a horror audience, or the House of Music. But there are plenty of Houses in the game so that everyone is bound to find something related to their interests. So, every player, regardless of cultural background, can equally claim the crown of darkness and win the game!!

For example, if you know the name of the clown in Stephen King’s IT, go for the House of Blood. If you can name all of the seven deadly sins, the House of the Occult is right up your street! Do you know which is the base ingredient for a zombie cocktail? Then the House of Lifestyle should be your first choice! House of History is for those that know the real name of Count Dracula, and House of Science for those that know the name of the natural substance that gives our skin and hair its dark colour. Oh, we almost forgot, those of you that know how many of the world’s 7 wonders of the ancient world were tombs, won’t feel lost in the House of the Arts. I bet Goths and metalheads are already eyeing up the house of music, but do they know what is a musical composition for a funeral mass called? But the main question remains in the House of Death: What did the deaths of King George II, Catherine the Great and Elvis Presley all share in common* 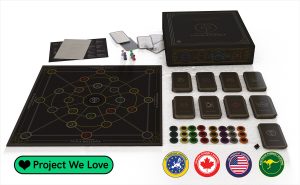 Where can I find it?
You can find Trivia Obscura™ +Do You Know Darkness?+on Kickstarter