I Spit on Your Grave (aka Day of the Woman) is undoubtedly one of the most controversial horror films ever made—which is unsurprising, considering it features a 25-minute rape scene. Named one of the worst movies ever made by critic Roger Ebert, the brutal rape-revenge film was banned in several countries and made the infamous Video Nasties list in the UK.

Opinions about the movie have softened considerably over time, with some of the people who initially picketed it even going on to call it a feminist film. But writer and director Meir Zarchi is back to test that goodwill with I Spit on Your Grave: Déjà Vu.

The poster just dropped for this modern-day sequel to the 1978 film, which starred Camille Keaton as Jennifer Hills. Keaton will reprise her role in Déjà Vu, with Jamie Bernadette (The 6th Friend) playing her daughter, Christy. 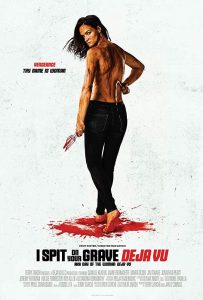 It’s difficult to get excited about this film, but with the original writer and director at the wheel, it could surprise us. In the age of #MeToo, a film which addresses issues like rape and sexual assault head on might be exactly what we need for catharsis. Or, it could be a tone-deaf flop. Frankly, it’s a little upsetting to think about anything bad happening to Jennifer Hills’ character ever again—but in a genre where virtually nothing is off limits, this sequel is no exception.

Take a look at the poster and the trailer below, and let us know what you think about this provocative follow-up.