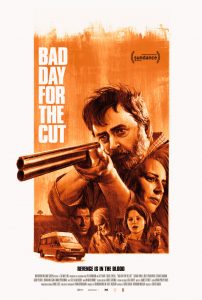 After screening at the Sundance Film Festival at the beginning of the year Bad Day for the Cut received extremely positive reviews. Critics praised the film’s impressive originality, comparing it to Jeremy Saulnier’s Blue Ruin.

Bad Day for the Cut comes from Irish director Chris Baugh and follows a farmer who sets out on a journey of revenge when his mother is murdered. You can check out the trailer for the film below. It looks like a hard-hitting and dramatic revenge tale as it shows the lengths a regular man will go to avenge the death of his mother. It’s also super gory and escalates into wondrously violent territory towards the end.

Bad Day for the Cut stars Nigel O’Neill, Susan Lynch, Jozef Pawlowski and Stuart Graham. The film should be released in limited theatres in the USA this year. Hopefully a UK release date will be on the cards soon, because this looks like an impressive feature-length debut from director Baugh.