WE SUMMON THE DARKNESS: FILM REVIEW 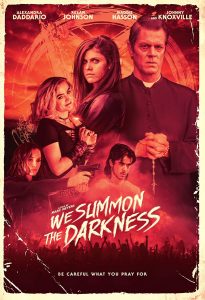 With horror in the grips of 80s-throwback-fever, it makes sense that we’re also seeing a slew of films centering around one of the weirdest and most horrifying aspects of the decade: the infamous Satanic Panic. While we know now that the widespread allegations of satanic ritual abuse were almost entirely baseless, director Marc Meyers offers a fascinating what-if scenario in his new horror film We Summon the Darkness.

The plot revolves around Val (Maddie Hasson), Alexis (Alexandra Daddario), and Beverly (Amy Forsyth), three friends attending a metal concert. In the parking lot outside, they run into Ivan (Austin Swift), Kovacs (Logan Miller), and Mark (Keean Johnson) and, after hitting it off, invite the boys back to Alexis’s secluded home for an afterparty. But a wave of Satanic slayings is sweeping the nation, are the girls safe?

We Summon the Darkness is an immensely fun movie, as heavy metal-tinged horror movies often are. Daddario and Hasson in particular attack their roles with such gleeful vigour that they steal every scene they’re in, while Forsyth handles her more level-headed character with reserved grace. The comedic tone is balanced expertly with some moments of vicious violence, leaving you laughing and wincing in the same breath.

The third act, sadly, can’t live up to the manic energy of the first two, falling into more predictable, tried-and-tested territory. There’s some talk about the dangers of religion that we’ve heard before a dozen times, and even the appearance of Johnny Knoxville as a fundamentalist preacher can’t make the payoff feel new. After the ace the movie pulls out of its sleeve early into the runtime, the climax pales in comparison. 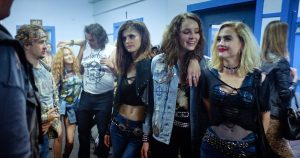 Still, while We Summon the Darkness doesn’t exactly break new ground, it’s a mightily entertaining crowd pleaser. The memorable performances elevate it beyond a great deal of similar fare, and the 80s setting never feels overdone. Summon this one up for a good time, and don’t forget the pizza and beer.