WATCH THE TRAILER FOR THE BABADOOK DIRECTOR’S NEW FILM 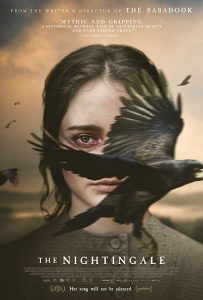 It was music to our ears to hear that Jennifer Kent would be following up her impressive directorial debut The Babadook with another horror film. That film is The Nightingale—and the official trailer is finally here.

The Nightingale is set in Tasmania in 1825, and sees Clare, a young Irish convict, losing her husband and baby at the hands of a brutal British soldier and his men. When justice fails her, she takes matters into her own hands, enlisting an Aboriginal tracker to accompany her through the wilderness on a mission of revenge.

The Nightingale will be released in theatres on August 2nd, 2019.