WATCH A CLIP FROM A24’S IN FABRIC 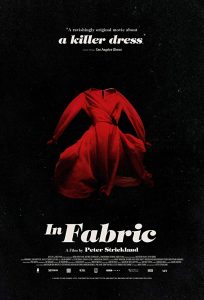 In Fabric, the new horror film from writer-director Peter Strickland (Berberian Sound Studio) and A24, hits theatres on December 6th ahead of its on demand release on December 10th. And in case you needed another reason to check it out, A24 has just released a bizarre new clip (below) featuring, of all things, a baby flippings its father the bird.

In the film, a lonely woman (Marianna Jean-Baptiste) visits a London department store where she’s fitted with a perfect dark red gown. Unfortunately, the dress unleashes a malevolent curse that threatens everyone who crosses its path.