Turbo Kid ranked high on many a horror fan’s Best Of 2015 list, and rightly so; it’s beautifully realised, ultra-violent and endearingly sweet. A nutbags love letter to ‘80s genre fare, it’s a film that would no doubt have had money thrown at it by producers had it come after the success of Stranger Things. 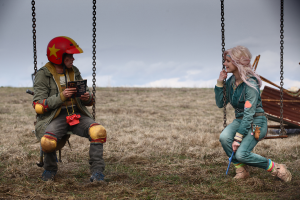 One of the coolest screen characters in recent years, Laurence Leboeuf’s Apple provides much of Turbo Kid’s gooey heart, although little is revealed about her past, and how she came to be in the part of the post-apocalyptic wasteland where she meets The Kid (Munro Chambers). If you’re looking for answers, you could do worse than watch this short, which charts Apple’s journey from the other side of the wasteland, up to the moment before meeting The Kid.

Leboeuf reprises her role in the film, entitled No Tomorrow – A Turbo Kid Tale. It was directed by RKSS (Anouk Whissell, Yoann-Karl Whissell, and François Simar), and plays out to the music of Le Matos (Jean-Nicolas Leupi and Jean-Philippe Bernier), who composed all the music for Turbo Kid.

The film nicely recaptures the feel of Turbo Kid, mixing the super-gross with the super-sweet and, as you’d imagine from a story centring on Apple, is alternately hilarious and heartbreaking.