All That She Wants is a Nasty The Bad Batch Clip

The weekend brought with it a clip from Ana Lily Amirpour’s ridiculously cool-looking The Bad Batch, showing Suki Waterhouse’s Arlen losing an arm to a nutjob and a hacksaw, all to the sounds of a ‘90s pop classic. 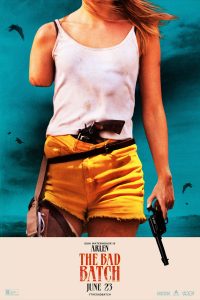 Synopsis:
Arlen (Waterhouse) is unceremoniously dumped in a Texas wasteland fenced off from civilized society. While trying to orient her unforgiving environment, she is captured by a savage band of cannibals and quickly realizes she’ll have to fight her way through her new reality. As Arlen adjusts to life in “the bad batch,” she discovers that being good or bad mostly depends on whom you’re standing next to.

Anyone who’s seen A Girl Walks Home Alone at Night would have bet good money on Amirpour’s follow-up being something uniquely cool, and not to jinx it, but The Bad Batch looks unlikely to be anything but.