Peacock has given a straight-to-series order for an as-yet-untitled horror series based on the novel Stinger by Robert McCammon—and horror maestro James Wan (Saw, The Conjuring, Insidious) is set to produce. 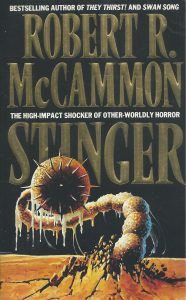 Ian McCulloch (Yellowstone) is writing and executive producing the series, which comes to us from Wan’s Atomic Monster and UCP. The plot will follow a disparate group of people on a ranch who must come together in the face of a mysterious threat…

First published in 1988, Stinger was a New York Times best-seller and received a Bram Stoker Award nomination for Best Novel. Here’s the plot synopsis from the author’s website:

“STINGER…an enemy more fearsome, more hideous than the most heart-stopping nightmares. STINGER…who ravages a remote Texas town until the men and women of Inferno rise up in a final, desperate battle. No evil yet known to man can match the searing hell of…STINGER.”