First up is Steven Yeun, who plays Glenn: 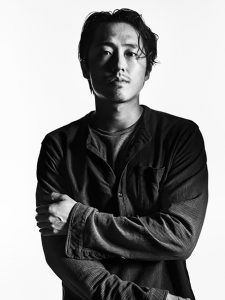 SCREAM: Last season, why did Glenn agree with Rick to attack the Saviours?

Steven Yeun: Glenn is fighting his classic battle – pragmatism over compassion. The one thing that checks his pragmatism is his heart. I don’t think Glenn sees any other option that his heart can push in any other direction but to do what Rick has suggested.

Why did Glenn step in and kill for Heath when they attacked the Outpost?

After Glenn kills the first Saviour, he knows that it takes a part of your soul to do it. Why not let someone keep that? Why have someone go to this place when he doesn’t need to? Since Glenn is already there, he tries to take it upon himself to let Heath still preserve himself.

In what way did the group underestimate Negan’s power and capabilities?

There is a cockiness to the group, not arrogance. We think we can overcome all odds. Last season, Glenn says we were wrong about the world, it is much much bigger. And now we have to figure it out all over again. The threats that we have experienced are not even close to the threats that are really truly out there. It is definitely a humbling moment, but I still wouldn’t count out our cockiness.

Tell us about filming the Season 7 Premiere.

As an actor, you strive for moments like this where you get to feel something, whether it be terrible or good. We’ve established quite a story and quite a show. To come to this point is a milestone. This only makes the show better. 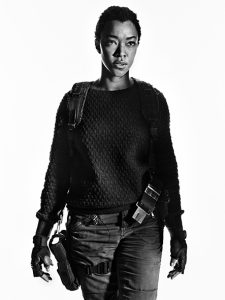 Next up is Sonequa Martin-Green, who plays Sasha:

SCREAM: How did Sasha and Abraham fall in love?

Sonequa Martin-Green: After the deaths of Bob and Tyreese, Sasha was in a pit of despair and in a pit of walkers. She eventually came to the other side, looked across the way to him, and saw he was in a place she just came from. We see the strength in each other and that is what pulls us together more than anything. We are very much partners in war and a love was birthed from that. Abraham is life after survival.

What makes Negan the most dangerous person this group has encountered?

He is using psychological abuse. That makes him different and more dangerous than anyone we have ever faced before. In his mind, he is more valuable than anyone else and that is sickening.

What made Negan successful at stopping the group in its tracks?

It was immediately alarming running out of the woods with Maggie on the stretcher and the first thing you hear are all these piercing whistles. When we reach the clearing, it is deafening. It’s coming from everywhere. You hear before you see just how many people are here. Then the lights flash on and you are completely confused.

Is there a future as the group sits awaiting their fate?

To have your life in someone else’s hands, who will do whatever they want with it, it is a very chilling thing. Without hope, why live? That will be the hardest thing about the future because they are in a seemingly hopeless situation.

Last to answer our questions today is Austin Amelio, who plays Dwight: 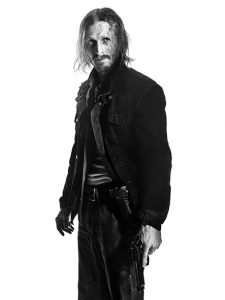 SCREAM: How Is Dwight Different Than When We First Met Him Last Season?

Austin Amelio: When you first met Dwight last season he has a romanticised vision of what the world should be like. He’s an idealistic guy. He wants the world to go back to how it was. He’s not used to the rules and what is going on. Then you see him at the end of the season and he has totally succumbed to this universe. He’s fully submersed in what the world is now.

Why Did Dwight Choose To Go Back to the Sanctuary and to Negan?

You don’t really leave the Sanctuary when you are under Negan’s thumb. He will find you and he will kill you. That’s how he works. I don’t think he understood the gravity of the situation. Negan is this weird dichotomy of someone that you hate and he protects you at the same time.

Why Does Dwight Hate Daryl So Much?

Daryl is a constant remembrance of who Dwight used to be.

What Are You Excited About For Your Character This Season?

I’m excited about the private moments you get to see with Dwight. You don’t know what he’s thinking.