The Walking Dead: Road To Survival 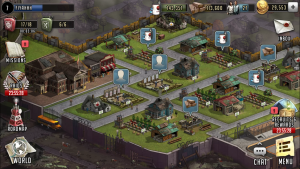 The Walking Dead might be the biggest horror franchise of all time at this point, with a legendary comic book, two television series and a series of successful video games under its belt. But even with such massive successes under its belt, The Walking Dead shows that it still has room to grow with Road to Survival, the first major mobile exclusive to truly capture the spirit of the series on iOS and Android devices.

Unlike other Walking Dead games, which are typically light on gameplay, Road to Survival features game mechanics just as deep and complex as the multilayered characters who you tune in to follow each week. The game combines role-playing combat, city building, and a choose-your-own-adventure storyline to create the biggest Walking Dead game ever, and one that really does justice to the complexity of its source material.

You’ll begin Road to Survival in the wilderness, scrambling for survival as zombie-like Walkers have spread across the world and dangerous scavengers fight for what little resources are left. You will quickly be introduced to the game’s conversation mechanic, which has you making multiple choice dialogue selections under the pressure of a fast timer. The system is intuitive and old and new players alike will pick it up quickly. 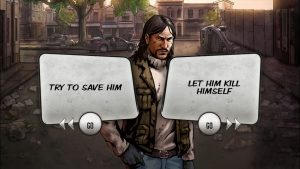 More importantly, you’ll find that the choices you make during these sections actually have a big impact on the story. Characters live and die based on the decisions you make, and your favorite Walking Dead television and comic characters aren’t held sacred as even fan-favorites like Michonne will find their fates wrapped up with yours.

After you’re introduced to the dialogue system, you will find yourself in a large town (fans of The Walking Dead will be familiar with this one) where you’ll start the town building segment. As you collect resources outside of town, you’ll return to build up your base, with bigger buildings leading to a stronger scouting party.

The final pillar of gameplay in Road to Survival is turn-based RPG combat. As you upgrade your party via dialogue choices and town updates, your party of survivors will grow in strength as well. Like a traditional RPG, you can power up your characters to make their attack and defense stronger. But the town upgrades also feed into your characters, with bigger buildings meaning more characters who can potentially join your party. 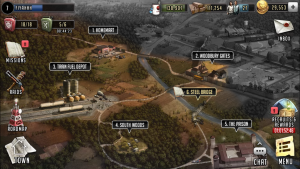 Gamers will love the complexity of the interlocking systems, while casual fans will appreciate the intuitive controls and ease of play. Fans of the show and comics are in for the best deal, though, as Road to Survival truly captures the grittiness and horror of the Walker invasion. Characters can die on a whim if you’re not careful, and combat is ruthlessly bloody and brutal. The story itself is a dark web of secrets and savagery sure to satisfy any Walking Dead aficionado.