Following our recent Q& A sessions with Season 7 cast, we now get to hear from the some of The Walking Dead Production team. 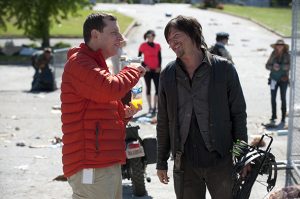 SCOTT M. GIMPLE Executive Producer, Showrunner, Writer :
SCREAM: When and how did you decide to make the end of last season a cliffhanger?

SCOTT M. GIMPLE: It was quite early on. It was not a last minute decision. Story-wise, that season’s story comes to an end when they are all on their knees. Geek-wise, like the classic Star Wars: The Empire Strikes Back, the audience is invited to use their imagination for the wait and are not provided with an ending, but rather a story to tell themselves.

SCREAM: Was it difficult to write the Season 7 Premiere?

SCREAM: Was the group blind to the ways of the world outside the Alexandria Safe Zone?

SCOTT M. GIMPLE: Last season, the characters were starting to get a feel that this was a larger world. This was much more than they have seen, and they have seen a lot. By opening that door, and stepping in, they are seeing so many things that they didn’t imagine – positive and negative.

SCREAM: Is Daryl to blame with where we find the group on their knees?

SCOTT M. GIMPLE: Daryl tried to help. The fact that he was trying to save some people was out of benevolence. That showed the kind of distance that Daryl has traveled in his life. He could have been Merle, but he is his own man.

SCREAM: What does the future hold for the group?

SCOTT M. GIMPLE: They are going to see a much larger world than even they found at Hilltop. That was just the start. Human beings, however isolated we are from one another throughout the world, and we are getting less and less isolated, are connected one way or another. By meeting one person, you are meeting a ton of people. You are finding a lot of solutions and you are finding a lot of problems.

SCREAM: How will Negan continue to use his resources to hold onto that power, and will his methods continue to be grand and unconventional?

SCOTT M. GIMPLE: Negan has an incredible amount of power, both in his cult personality and his practical man power. He has legions and legions of people who identify themselves as him. He’s got a system that has worked very well by him and it fairly immediately neutralised Rick and his group, who are quite formidable. Negan knows people. He knows human nature. He knows himself. For a powerful and smart person to know human nature that well – that is very dangerous.

SCREAM: Why is Negan such an important character as this story moves forward?

SCREAM: We get to see the Kingdom this season. Is it a fairy tale or a dangerous illusion?

SCOTT M. GIMPLE: I definitely don’t think the Kingdom is a fairy tale. People do need stories and Ezekiel has a good story, and he walks around with a tiger. 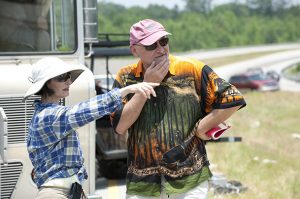 GALE ANNE HURD Executive Producer:
SCREAM: How does this season compare to past seasons?

GALE ANNE HURD: This season is a real game changer. Introducing Negan is something that fans of the comic book have really wanted to see on screen, and now they will. We have seen leaders of single communities before, but he is in control of a number of communities. It really is his rules and he won’t stop at anything to make sure that he gets his way. The level of retribution Negan is capable of we have never seen on this show before – I don’t think we’ve seen on television before.

SCREAM: What should fans fear most about Negan?

GALE ANNE HURD: The fans should fear the most that Negan is capable of killing anyone. Anyone that you may love on the show in a split second could be gone.

SCREAM: Can the group survive and move forward from the encounter with Negan?

GALE ANNE HURD: The show is about survival. The very ethos of this show is that even in the darkest hour there is going to be the dawn. You learn from your mistakes and you find a way to make it through until tomorrow. Once the sun comes up, you make it through until the next day. There is never going to be a point where over all as a group – maybe individuals might give up – but as a group, they live for each other, they support each other, and that group gives each one of them a reason to live.

SCREAM: What do you love most about The Walking Dead?

GALE ANNE HURD: To me, what is great about The Walking Dead universe is that it is a character-driven world. A world of characters that we can identify with, characters that break our hearts. There is always something so fascinating, so compelling, and so heartbreaking in each one of their journeys. 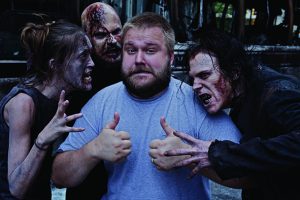 ROBERT KIRKMAN Executive Producer, Writer:
SCREAM: Is the premiere worth the wait?

ROBERT KIRKMAN: It is absolutely worth the wait. It’s a fantastic premiere to a fantastic season. I think everyone will be blown away. There are all kinds of great stuff coming this season.

SCREAM: What makes Negan different from other bad guys?

ROBERT KIRKMAN: The character of Negan, especially how Jeffrey Dean Morgan portrays him, is so warm and engaging, while threatening and terrifying. You don’t want him to kill you, but you are engaged in the entire scenario and you don’t want him to stop talking. Because of that, his character is going to be very well-loved despite what he does. 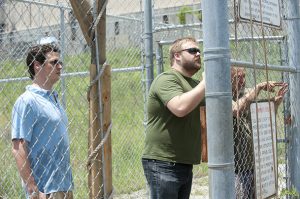 DAVID ALPERT Executive Producer:
SCREAM: How does this season compare to past seasons?

DAVID ALPERT: The thing that I love is we saw society torn down and these people living out there in the apocalypse alone in very primitive conditions. Then you started to see a little bit with the Governor and Woodbury as they started to try to bring society back, but it was very small scale and tiny in scope. The stuff that is going on this year, and the stuff we are building at the moment, is so much larger in scale and scope than anything that I ever anticipated we would be able to pull off.

SCREAM: Do you think Robert Kirkman wrote it this way on purpose?

DAVID ALPERT: Robert, years ago, said, “Now that we’re doing the comic and the show at the same time, I’m just going to write stuff we could never ever pull off. We’ll never be able to do this in a TV show.” And Scott [Gimple] says, “We’re doing it.” It’s been an amazing thing to see those things that were purposefully set at a level that were impossible to be pulled off in an amazing way. 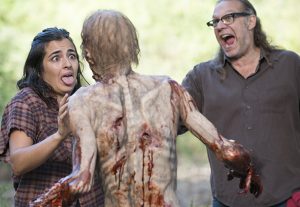 GREG NICOTERO: There was a bright future for them. They learned how to work together. They had threats from outside sources that they dealt with. By Episode 15, they seemed to have a pretty good grasp on things. Then it all went downhill. The over-confidence of Rick Grimes and the group led to them finding themselves in a very tenuous situation with a guy named Negan.

SCREAM: Were they blind to the world outside the Alexandria Safe Zone?

GREG NICOTERO: They just underestimated it. They never imagined in their wildest dreams that there would be a group of people that could not only come toe-to-toe with them, but could beat them.

SCREAM: How was directing the Season 7 Premiere?

GREG NICOTERO: It was intense and it affected me in a way I did not expect. It was a 9-day shoot that was brutal.

SCREAM: What can fans expect to feel with the Season 7 Premiere?

GREG NICOTERO: Every emotion that you can imagine feeling, you will feel. You think they are at the bottom, but there is a lot further for them to go.

SCREAM: What does Jeffrey Dean Morgan bring to the role of Negan?

GREG NICOTERO: Negan is charismatic and you find yourself holding on every sick word that he is saying. You can’t take your eyes off of him. You can’t not listen to what he is saying because he is magnetic. The fact that he does these absolutely reprehensible things while he is spouting this excruciating, colourful, completely out-of-left-field dialogue – the character is captivating. Jeffrey has embodied that perfectly.

SCREAM: Tell us about King Ezekiel…

GREG NICOTERO: Just image, you are in the woods and you hear about this guy who has a tiger and runs this place called the Kingdom. Word-of-mouth is enough protection to keep most of the people away. Ezekiel and Rick and Negan all have this fantastic iconic triangle of word-of-mouth that keeps people from screwing with them too much.

SCREAM: Tell us about the walker make up this season…

GREG NICOTERO: Getting a sense of scale and a sense of scope – that is all it is about. Every single walker gag, every single action sequence that we have designed and created for this season, is about scale and about scope. Every single episode not only do we have these great dramatic themes going on and continued subjugation by Negan, we have these big elaborate set pieces. We have a responsibility and obligation to our viewers to continue to push ourselves, and that’s what we are doing. 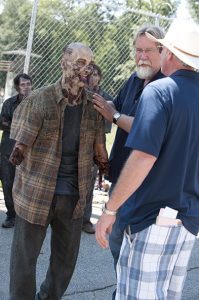 TOM LUSE Executive Producer:
SCREAM: Where is Rick emotionally and physically at the start of this season?

TOM LUSE: Rick is shattered. Rick has seen the impossible happen – he’s seen them become powerless. To be completely powerless in this situation is emotionally crushing.

SCREAM: Does Negan live by a certain code?

TOM LUSE: The character of Negan in the comic books that Robert Kirkman wrote represents might equals right. What Negan has done is created an Army, and that Army believes in him. He uses might to control the destiny of the area around him. This might is right concept is what Negan embodies for this show.

SCREAM: Is there a difference between the leaders of the Kingdom and Hilltop?

TOM LUSE: A man with a tiger is a man to rally around is the idea of Ezekiel. He does want to help the people of the Kingdom have full and free lives. Two words that describe Gregory are “plausible deniability.” He is a politician in the worst possible sense. He wants to make sure he is protected and that he is covered.

SCREAM: What do you like most about Season 7 of The Walking Dead?

TOM LUSE: What is great about Season Seven are all the new worlds we are starting to explore beyond the Alexandria safe zone. When Jesus says to Rick that your world is about to get a whole lot bigger, it really is in Season Seven. As far as the looks we’re creating, the characters, different populations, and how that all interacts – it’s a crazy time.

SCREAM: What are you proudest of from a production standpoint for all seven seasons?

TOM LUSE: Surviving six-plus seasons on The Walking Dead. It is a death march, this show. The first episode we ever did we had to take over 13 square blocks of downtown Atlanta and have Rick ride in on a horse. It’s just gone on from there!