Synopsis:
A year after surviving a horrific car accident which killed a baby in the other vehicle, a pregnant woman begins experiencing frightening visions in her new home. 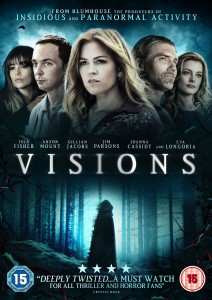 After struggling to keep my eyes open through Blumhouse’s latest theatrical release (The Darkness) last month, I was not expecting much from their new film Visions, which came out on DVD in the UK on June 20th. Here was yet another haunted house movie with some star-power attached, in this case Isla Fisher (Burke and Hare). Cue the strange things going bump in the night… But wait. Keep watching to the final act and there’s something interesting hiding inside what for all intents and purposes looks like a conventional story of a haunting. Nicely done, Blumhouse.

It’s difficult to explain what works about Visions without giving away its clever twist, so let’s talk about the setup instead. Fisher plays Eveleigh, a fragile woman suffering PTSD after being involved in a car accident which killed an infant in the other vehicle. A year later, and now pregnant with her own child, Eveleigh and her husband David (Anson Mount, from ABC’s Hell on Wheels) have moved into an old vineyard in the hope of starting fresh. Things seem to be going well at first, with Eveleigh quickly making a new friend in Sadie (Community’s Gillian Jacobs) at prenatal yoga. However, it isn’t long before Eveleigh begins experiencing strange goings-on in her new home – a phantom high-pitched whistling, unsettling visions like wine bottles and windows smashing which no one else can see. Her doctor (played by The Big Bang Theory’s Jim Parsons) believes she’s hallucinating and ought to resume taking antidepressants, but Eveleigh worries the drugs might be bad for the baby. Sadie agrees she has to do what’s best for the baby, and the two begin investigating the history of the vineyard to find out if anything might have happened there to trigger a haunting.

The first half of Visions is completely unremarkable. That’s not to say it’s bad – the acting is fine, and there are a couple of decent jump scares along the way – but it was nothing I hadn’t seen before, and it was taking a lot of restraint on my part not to divert my attention towards something else while watching. And then, quite unexpectedly, the film does something very clever. I’m not going to say what it is, but Visions isn’t quite the paint-by-numbers haunted house film it at first glance appears to be. Is Eveleigh just going crazy now she’s stopped taking her medication? Or do her visions point back to a horrible secret in the house’s history? My lips are sealed – you’ll have to watch to find out. 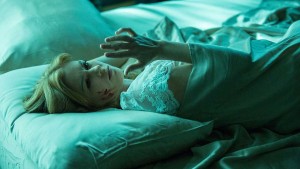 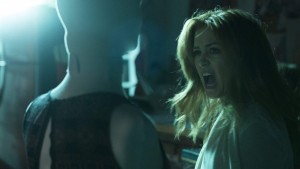 It’s unfortunate that the film’s second twist isn’t nearly as clever as its first, and viewers will likely see it coming long before the characters make the discovery. Fans of New French Extremism may also spot that it suspiciously resembles the plot of a French film from several years ago, a comparison which may leave viewers disappointed by how bloodless Visions feels in comparison. Which is a shame, because it’s directed and edited by Saw alumni Kevin Greutert, the man behind the fantastic Saw VI (and the woeful Saw: The Final Chapter, but I don’t hold that against him). You’d think gore would come naturally to him by now, but a lot of the violence in Visions is either off screen or lost in a sea of choppy editing.

The poor editing in Visions is one of its major downfalls, another surprise considering Greutert’s extensive work in that field. Parts of the film feel rushed, and subplots like the potential meth lab next door are dropped unceremoniously in the final act (I’ve heard talk of an extended cut, but it’s not on the DVD so who knows). The talented cast are all too often wasted, with recognisable actors like Parsons and Eva Longoria showing up for only two or three scenes and barely making an impact on the plot at all. It feels as though a good deal may have been left on the cutting room floor, and with the film clocking in at just eight-two minutes, a little more time spent developing the characters certainly wouldn’t have hurt. 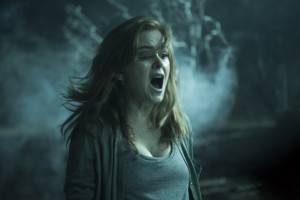 While it’s no masterpiece, Visions at least tackles some familiar ground with a fresh pair of eyes. Unfortunately it’s not particularly scary, and it’s first half is dull despite the best efforts of its cast. But a solid premise and an enjoyable final act make it worth a watch – just be warned that there’s some snooze-worthy filler in store before you get to the good part.