Feral, usually disfigured cannibals are a staple of modern American horror cinema, but more seldom seen in British films. When they are, they often tend to be a little more ‘human’ than their stateside counterparts, as in films such as Ravenous or Sawney: Flesh of Man. With chainsaws, skin-masks and sadistic torture, Escape From Cannibal Farm looks to tread closer to the American tradition, as seen in this new trailer.

Despite that brilliant, adventure movie title, the film looks to be a serious and visceral affair, and one packed with blood and nastiness. Escape From Cannibal Farm is the work of writer/director Charlie Steeds (Deadman Apocalypse), and sees him reteaming with Deadman stars Kate Marie Davies, Barrington De La Roche, David Lenik and Sam Lane, as The Boy With The Melted Face. 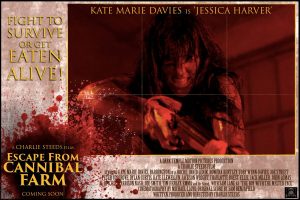 In the British countryside, the Harver family head out on an idyllic summer camping trip where they can bury past tensions and enjoy some family bonding. But when their camp is sabotaged by an unseen intruder in the night, they head to the nearby creepy old farm desperate for help, where vengeful farmer Hunt Hansen and his hideously deformed son aren’t farming animals…

Caged and waiting for their limbs to be severed, cooked, and eaten one at a time, the Harver family must overcome their differences and unite in order to escape alive!

Keep an eye out for Escape From Cannibal Farm in 2017.