Van Helsing Will Return for a Second Season

Syfy’s Van Helsing must be doing well, because the show has already been confirmed for a second season. The show is currently only a few episodes into its 13-episode run, but there are another 13 on the way once series 1 comes to an end. 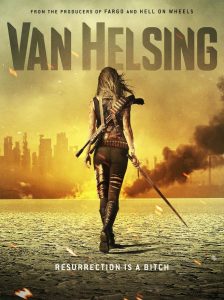 Van Helsing follows Vanessa Helsing when she is resurrected in the future to discover that vampires have taken over the earth. She becomes the last hope for a humanity that must fight for their chance to regain control of the world.

When speaking about Van Helsing’s second season, showrunner Neil LaBute said:
“We have a wonderful and terrifying road ahead planned for Vanessa, her allies and her enemies. I think this is a world and a story that can be sustained for many years and I am inspired to do so thanks to Syfy’s obvious trust and commitment in the storytellers, cast and crew.”

Van Helsing stars Kelly Overton (True Blood) in the title role and is currently airing on Syfy on Friday nights.