Family Blood will be arriving on Netflix on 31st March after a short and sweet week-long theatrical release in Hollywood. The film comes from Blumhouse studios, who appear to be dropping the latest genre offerings left, right and centre. We’re obviously not complaining about that! 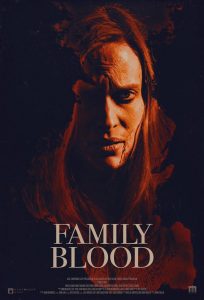 Synopsis:
Ellie, a recovering drug addict, has just moved to a new city with her two teenage children. She has struggled to stay sober in the past and is determined to make it work this time, finding a stable job and regularly attending her meetings. Unfortunately, new friends, a new job, and the chance of a new life, can’t keep Ellie from slipping once again. Her life changes when she meets Christopher – a different kind of addict – which forces her daughter and son to accept a new version of Ellie.

It sounds like Ellie’s new friend is a vampire…

Family Blood comes from director Sonny Mallhi and stars Vinessa Shaw, James Ransone, Colin Ford and Ajiona Alexus. Be sure to catch the film on Netflix from 31st March if you can’t make it to Hollywood for the theatrical run.