US Audiences to Get Revenge in May 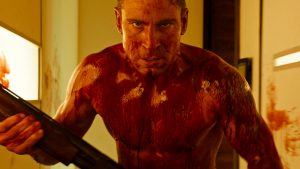 Having snapped the film up straight out of this year’s Sundance festival, NEON has set a date for their theatrical and home release of Coralie Fargeat’s human-hunting horror Revenge.

The brutal film – which went down a storm at Sundance – marks the feature debut for director Fargeat, who also wrote the script. It stars Rings’ Matilda Lutz and Kevin Janssens.

Synopsis:
Three wealthy, middle-aged CEOs – all married family men – get together for their annual hunting game in a desert canyon. It’s a way for them to let off steam and affirm their manhood with guns. But this time, one of them has come along with his young mistress, a sexy Lolita who quickly arouses the interest of the two others… Things get out of hand… Left for dead in the middle of this arid hell, the young woman comes back to life, and the hunting game turns into a ruthless manhunt.

NEON is bringing Revenge to US cinemas and VOD on May 11th.