There has been a lot of hype about this one so I couldn’t wait to read it. I hoped it wasn’t going to be the same sort of weird, and would be something different. Boy was I in for a surprise!

Synopsis:
Chris is getting ready for a date with a girl he met online. He has never met her face to face before. He goes to the date and the next thing he knows, he wakes up in a strange house, being helped by Cassandra. It looks like he has been mugged.

He is not alone though. There are a lot of people waking up confused in Cassandra’s house.

I normally follow a rough agenda when I do reviews. I start by telling you something about the characters. Not in this one. Chris and Cassandra are all your getting. There is a list of characters but to tell you anything about them would give stuff away and I don’t want to do that.

I then normally follow on to the plot. Nope. Not doing that either. To tell you anything of what goes on in this storyline would spoil your fun and surprises.

So what am I going to tell you in this review? Do not eat while reading it. Set aside enough time to read it in one go because you will not want to put it down. If you are male: you know the way in films when an operation is needed and the victim is miles from anywhere and they give him some stranger’s belt to bite down on to save him biting his own tongue off? Yeah, keep a belt handy. You will want something to bite down on.

Eh… wow. I have had this for a while. Why didn’t I read it straight away? I had a feeling about it. I need to listen to those feelings. This is so far removed from Mr Park’s story in The Black Room Manuscripts that you would be excused for thinking they had been written by two different people. Don’t get me wrong, the writing is equally as good in both. In fact, good is probably a lame word to use. The writing in Upon Waking is superb. Sublime. Spectacular. Painful?

Yeah it’s painful to read some of the stuff in this book. Again there is so much I want to tell you about what happens but I would slap myself later if I did. It is bloody. It is gory. It has one of the most unassuming villains you will probably ever meet. By that, I mean if you passed them in the street, you would think they were a dork, not a killer. A feckin sadistic killer at that. Probably one of the worst I have read about. Some of their methods of torture and murder are things that most killers could only fantasise about. Brutal. Bloody. They will bring tears to your eyes (don’t forget the belt men!) 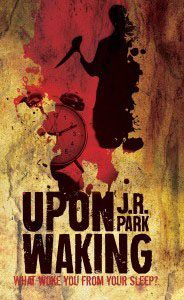 Justin Park needs help. I can’t think of any other way of putting it. The part of his mind that this story came from must be one of the darkest darkest places in the universe. His writing however, is just wonderful. This story is full of surprises but it is written in such a way that even the surprises are surprised by themselves. It is done in a wonderfully nonchalant way. It just moseys along at, not a hundred miles an hour but a steady pace that most books like this couldn’t pull off. It’s almost calm. Nothing to see here folks. Move along. But it isn’t. It is absolutely horrific in the most horrific of ways.

I sicked in my own mouth more than once. Tears were running down my face more than once at the thought of some of the injuries. But – I can’t believe I’m going to say this – it wasn’t gratuitous. It was perfect for the story. Perfectly horrifically gory, brutal and bloody but perfect all the same.

I realise I probably haven’t told you very much about this book in this review. I hope you get some sort of feeling for it though. I can’t tell you details of the story without giving it away. Trust me, I want to keep saying “and the bit where… ” but I won’t.

I absolutely loved this story.

Highest possible recommendation. I seem to say that a lot about these Sinister Horror guys.

To summarise: not telling you here either. Just buy the thing! Don’t forget the belt men!