Cold Iron Studios’ Aliens: Fireteam is set for release this summer, and the game is getting its own official prequel novel! 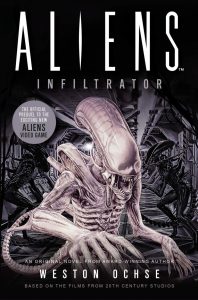 Called Aliens: Infiltrator, the book will be released on April 20th from Titan Books. Weston Ochse wrote the novel, which will see Dr. Timothy Hoenikker arriving on Pala Station, a Weyland-Yutani facility, lured there by the promise of alien artefacts. Instead, he finds a warped bureaucracy and staff of misfits testing the effects of Xenomorph bio-materials on living creatures. Unbeknownst to the personnel, however, there is an infiltrator among them whose actions could spell disaster.

Also on staff is Victor Rawlings, a former marine who gathers together other veterans to prepare for the worst. As the personnel receive a delivery of alien eggs, the experiments spin out of control, and only the former Colonial Marines can stand between the humans and certain death…