The Unspoken Heading to US DVD 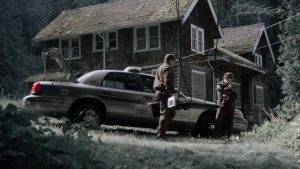 The Unspoken is on its way to DVD in the US from Anchor Bay. Hitting shelves on December 6th, the release follows the film’s appearance on VOD and the UK DVD, which is out now.

The chiller is written and directed by award-winning filmmaker Sheldon Wilson, who garnered acclaim for his 2004 breakthrough Shallow Ground, and has since directed a number of TV movies including Scarecrow and Snowmageddon.

Described in the press release as “a sinister tale of haunting and murder,” and “…a refreshing twist on the horror genre”, The Unspoken tells of the Anderson family, who in 1997 vanished from their country home with no trace or explanation. The house has remained quiet and undisturbed for 17 years, but now something is stirring…

Executive producer Steven Schneider’s credits include the Insidious and Paranormal Activity series, as well as The Lords of Salem, The Visit and Blair Witch.