Insane asylums are something we like to think are things of the past. Dusty hallways overrun with screaming lunatics and barren women are only figments of what existed when man decided that the quickest cure for a touch of the maladies was an ice pick to the brain. Yet, while the name “insane asylum” is fantastically out-of-date, psychiatric hospitals do still exist, albeit, much more caring than they were. Most are well-funded and well-taken care of with a staff that at least tolerates their jobs and others, well, others are the loose models for BOOM! Studios newest horror comic, Unsound. Focusing on a particularly nasty situation, Unsound explores the terrors of a mental institution that ends up running itself and the ghosts that haunt the darkened corners of the buildings. A genuinely creepy read, this comic marks another successful notch on horror writer Cullen Bunn’s belt.

The official press release gives a bit more away than the first issue reveals, so the first issue acts as more of an introduction to the world of the Saint Cascia Mental Institution. (Fun side note: Saint Cascia is the patron saint of abused wives and heartbroken women; perhaps a nod to the early popular practice of putting undesirable women into asylums?) The comic focuses on the Institutions newest nurse, Ashli, on the first day of her job. As she passes out medicine and is shown around by the head nurse, the readers are introduced to the bizarre occupants of the building. From John Doe’s that hide behind paper masks to three women who speak in succession, Ashli quickly finds out why there’s such a high turnover rate, but it’s not until she sees the ghosts do things really start to go crazy. What is really crawling behind the walls of the sacred institution and who are the men taking away patients one by one?

Unsound is honestly, pretty stunning. It’s a very atmospheric work that focuses on creating a visual experience just as much as telling a story. This is a great example of a pair of creators who understand the possibilities of the comic medium and work together to give the readers a complete experience. Cullen Bunn’s writing is very precise and is tethered perfectly to the world he has created. The characters, specifically that of Ashli and the head nurse, Nurse Jeffers, are a good opposite couple of each other without going to extremes. Ashli is new and a relatively blank slate, which allows the readers to explore the world from new eyes, while Nurse Jeffers, from appearance to action, is someone who has been there way too long. As Ashli and Nurse Jeffers walk around the building, it’s apparent that there are things in the building that Nurse Jeffers has long stopped seeing which only makes Ashli’s experience that much more terrifying. A person really can live with ghosts and monsters. 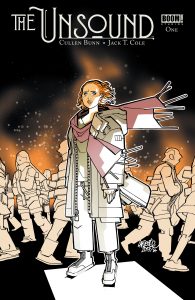 The art by Jack T. Cole, not to be confused with fifties pin-up artist Jack Cole, has a bit of an odd style that leans heavily into European and Heavy Metal art instead of the American pop-art style. The inking is thin and wispy, which is a wonderful way to play up the creeping shadows that lurk in the comic. Everything has a ghostly, wispy look to it, like the building itself is only moments from succumbing to the madness inside of it. He uses a subdued colour palate and even plays around with angles and vanishing points giving a dream-like feel to the work. Match that with all the creeping maniacs in the building and you got yourself one solid piece of horror literature.

Unsound is a very exciting addition to the world of horror comics and is not shy about exploring the dark corners of both the human psyche and the buildings they occupy. Grab your copy now!