An unsettling, but rather pretty, new image has been unleashed for Corin Hardy’s The Nun and it shows Taissa Farmiga’s attachment to the terrifying antagonist Valak. We’ve seen a lot from the scary nun, but the more we see, the scarier she gets. 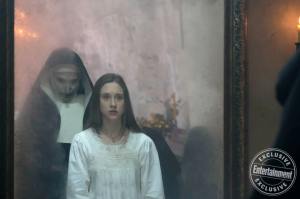 The Nun will add to the ever-expanding Conjuring universe that began back in 2012 with The Conjuring, but features 2 sequels and 2 Annabelle spin-offs. In addition to The Nun, we are also going to be treated to a spin-off of The Crooked Man, who appeared in The Conjuring 2.

Synopsis:
When a young nun at a cloistered abbey in Romania takes her own life, a priest with a haunted past and a novitiate on the threshold of her final vows are sent by the Vatican to investigate. Together they uncover the order’s unholy secret. Risking not only their lives but their faith and their very souls, they confront a malevolent force in the form of the same demonic nun that first terrorised audiences in The Conjuring 2, as the abbey becomes a horrific battleground between the living and the damned.

The Hallow director Corin Hardy is at the helm of The Nun and directs a screenplay written by Gary Dauberman (It).