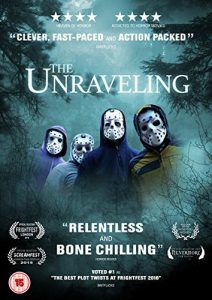 The Unraveling is the type of film one should enter as blindly as possible. In fact, your best bet would be to skip all trailers and reviews and check back at a later date after you’ve seen it for yourself. Director Thomas Jakobsen and co-writer Justin S. Monroe have set out to lead the viewer down a familiar path in many ways, but the destination isn’t as clear as you might think. Therefore, I’ll cover the basic setup and hope you decide to give it a chance.

Not long out of rehab, addict Michael (Zack Gold) has a pregnant fiancee, Jess (Cooper Harris), and finds himself working in a dead end job to get by. But that’s the least of his problems; he’s also fallen back into old habits and robbed $12,000 from the type of people you don’t steal money from if you want to ensure your future child grows up knowing both parents. Then, one day, following a long shift, Michael is kidnapped by a group of four masked men who dump him in the trunk of their car and drive him far out into the wilderness.

Upon arrival, Michael finds himself with men, surrounded by a sea of trees and nowhere to go. Thankfully for him, however, the kidnappers turn out to be his friend’s and this is their idea of a prank and a way to celebrate his recent engagement since he skipped out on previous plans. However, it turns out they’re not alone in the woods, either; someone or something is out there, and it doesn’t take long before everything goes downhill fast. Or does it? 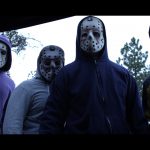 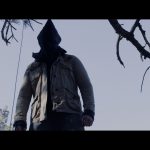 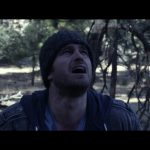 On paper The Unraveling bears all the hallmarks of a generic survival thriller. But, as the title suggests, there’s more to unpack here than simply finding out who or what poses danger for our city slickers. As Michael begins to experience the side effects of his cold turkey, it becomes unclear if their ordeal is real or imaginary and, as the film progresses, it enters unexpected territory. Some viewers will see the reveal coming before the film reveals its cards, but it still offers an alternative to other films of this ilk. Slasher aficionados will also recall one of the most divisive slasher movies of the 1980s, but telling you the film in question would spoil the surprise immediately. However, I suspect it will polarise viewers just the same, but at least it offers something slightly off-base without straying too far into left-field.